This article contains content from the EvaGeeks.org Wiki article Zeruel. Please view that page's revision history for the list of authors.
This article largely borrows it content from another wiki, such as Wikipedia or EvaGeeks. Substantial cleanup and reformatting may be needed.

This article has a collection of images to further represent its content. To see its gallery, visit Zeruel/Gallery. 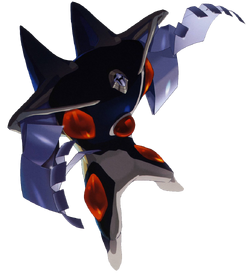 Zeruel (katakana: ゼルエル; Hebrew: זוריאל) is the Fourteenth Angel, and one of the most powerful: the deadliest of the Angels that focus on direct, conventional combat. It is among the three to penetrate NERV Headquarters, and the only one to do so through a direct assault. Zeruel bears the unique distinction of providing (however unwillingly) the S² Engine that elevates Unit-01 to "god" status.

Appearing soon after the fight against the 13th Angel, Bardiel, Zeruel attacked NERV before it had time to fully recover from the previous Angel's attack. Zeruel breached the armor layers above the GeoFront at great speed, giving NERV no time to try to engage it on the surface. Unit-02 was deployed inside of the GeoFront to engage it, but its pallet rifle and rocket fire proved ineffective. Zeruel used its arms to cut off Unit-02's arms, and soon after, its head, taking it out of battle. Soon after, Unit-00 emerged from underground, still missing an arm from the previous battle, and charged Zeruel with an N² bomb in its remaining arm. Despite shoving through the Angel's A.T. Field and the bomb making physical contact with the Angel, Zeruel emerged unharmed while Unit-00, having lost its other arm to the resultant explosion, was also incapacitated.

Zeruel breached NERV headquarters and descended to Central Dogma, breaking through the wall into the command center's central display area. The Angel attempted to kill the personnel inside but was stopped by Unit-01, which fought it out of the room. Zeruel blasted off Unit-01's left arm but the Eva succeeded in forcing it onto an Evangelion launching catapult, taking the fight to the surface. Unit-01 battered Zeruel and was on the verge of ripping off the Angel's face before it ran out of power.

Zeruel destroyed the immobilized Eva's chest plate and struck repeatedly at the Eva's now-exposed core, the shocks threatening to crush the Entry Plug inside the Eva. However, Unit-01 then entered berserk mode, blocked the Angel's attacks, ripped off the Angel's arm to regenerate its own arm and then proceeded to inflict crippling gashes on Zeruel's body using an offensive A.T. Field attack. Zeruel's face was crushed as it attempted a last-ditch attack on Unit-01. The Eva proceeded to consume the Angel's body, absorbing Zeruel's S² Engine in the process.

Zeruel is a vaguely humanoid Angel slightly larger than an Evangelion, with a large, bulky body and prominent core.

Zeruel's distinctive arms hang from its large, bony "shoulders", folding up when not used and reaching lengths at least three times the Angel's height when deployed, serving as deadly cutting weapons. Zeruel is shown to be capable of forming fists in production drawings, although the only time separate digits are seen in-show is when Zeruel lifts Unit-01 by the head.

Zeruel's face is capable of changing its consistency, from becoming hard enough to cast sparks on impact to rubbery enough to be lifted like a mask. It is attached to a sinewy "neck" normally kept inside the body and is capable of a limited degree of movement. Two eyes hidden inside the deep "sockets" are, as with Zeruel's kin Sachiel and Israfel, employed for both vision and energy projection.

Zeruel demonstrates an enhanced ability for firing the familiar cross-shaped energy blasts fired by Sachiel: a single shot breaches eighteen of the GeoFront's twenty-two protective armor layers and is capable of setting off four in rapid succession. It can also fire focused energy beams directly from its eyes, taking a few seconds to charge before releasing a powerful burst of energy.

Zeruel moves by A.T. Field-assisted levitation, although it is capable of quadrupedal locomotion as well. Its legs, although stubby and without feet, are not vestigial, and in combination with the folded arms allow the Angel to walk on all fours.

The core is rather large relative to Zeruel's body, and the S² Engine within may be, accordingly, "oversized", perhaps accounting in part for the discrepancy in power between Zeruel and other, similarly sized Angels. Zeruel possesses a protective lid-membrane capable of shielding the core when threatened, and it serves as a testament to Zeruel's incredibly tough constitution: even when an N² bomb is detonated in direct contact with the (protected) core, not only is the red sphere left completely unscathed, but the rest of the body is, as well.

A heavily redesigned version of Zeruel appears in Evangelion 2.0 as the 10th Angel.

The 10th Angel appears over Tokyo-3 and lays waste to the city's defenses in short time. It effortlessly breaches the Geofront, then unfolds its body and enters.

Mari Illustrious Makinami deploys inside Unit-02 and confronts the 10th Angel within the Geofront, attacking first with rifle fire and then attempting a melee attack with a Thunder Spear and the right shoulder pylon's needle gun. None make a dent in the Angel's defensive power, and as a result Mari resorts to activating Unit-02's Beast Mode. Despite this boost in strength and mobility, the Eva is still unable to breach the Angel's A.T. Field and is severely damaged by the Angel's counterattack.

Unit-00 attacks with a large N² missile, and, with Unit-02's aid, the Angel's field is finally penetrated. The attack is again ineffective, and Unit-00 loses both arms in the explosion. The pilot makes no attempt to resist as the Angel extends an appendage from its mouth and devours the Eva. The 10th Angel subsequently grows a humanoid body and, due to shifting its pattern to Unit-00's, gains the ability to bypass the automated self-destruct that would otherwise prevent it from reaching Lilith's chamber.

The Angel demolishes the NERV pyramid and invades the main shaft, confronting and nearly annihilating the command center crew before being stopped by Shinji in Unit-01. The fight between both proceeds in much the same manner as the original series until Unit-01 runs out of power, at which point the Angel skewers the Eva and throws it against the remains of the pyramid. The Eva soon revives and quickly reaches incredible levels of power: reconstructing its lost arm from its A.T. Field, blocking all of the 10th Angel's overpowered attacks, and finally taking the Angel down with optical energy beams. Shinji recovers Rei from inside the Angel's body, and its blood-like remains are assimilated into Unit-01 as Third Impact is initiated.

The 10th Angel is over twice the size of an Eva, with a fleshy, arthropod-like body over which a large dark green cowl of undulating prehensile ribbons is draped. When the Angel first appears, the cowl is folded up, giving the Angel a mummy-like appearance. Two of the ribbons are much longer than the others and serve as its primary melee weapon, capable of being coiled up into piercing drills of variable circumference; the Angel also uses them to prop itself up when standing. The face—modified slightly from the original Zeruel—conceals two red eyes and a mouth containing a tripartite jaw and a biting tongue-like appendage that can grow to massive size. Two sets of interlocking "teeth" flanking the core are capable of closing down to provide additional protection to the organ if needed.

The Angel's A.T. Field is extremely strong, capable of protecting it from multiple point-blank missile collisions with no effort. It can also extend multiple layered barriers outward, which can forcibly push foes away along with making any effort to breach the Angel's field that much more energy-intensive. The 10th Angel's other energy projection abilities are much the same as Zeruel's if superior in both power (penetrating all 24 layers of the Geofronts protection in a single shot) and fire capability (capable of rapidly firing an uncountable number of Cross blasts in a single volley).

Upon devouring and absorbing Unit-00, the 10th Angel contains the Eva's core within its own, and the Angel's intrinsic pattern is replaced by that of the Eva's. The Angel's body reconfigures into the form of a distorted human female with ghostly white flesh accented by gray markings, abnormally long and gaunt arms, and lower legs that terminate in stubs. The humanoid arms replace the primary cutting ribbons but can be instantaneously reverted as need dictates. The Angel also employs two additional ribbons when it battles the reactivated Unit-01.

After being incapacitated by Unit-01, the humanoid extension of the Angel's body becomes a homogeneous mass of ribbons (off-screen, without explanation). Unit-01 forcibly extracts Unit-00's core and kills the 10th. Its body fluid reforms around Unit-00's core in the form of a giant red Rei, which then fuses into Unit-01. Thus the Angel has effectively been absorbed by Unit-01, but whether Unit-01 received a Fruit of Life out of the deal, as in NGE, is not yet known.

In contrast with the other Angels, the 10th is never seen deploying a halo,[1] and a rainbow appears well in advance of its death, when Unit-01 delivers the crippling blow.

Yoshitoh Asari returned to provide an abundance of new ideas for a reworked version of Zeruel, many of which were combined to provide the final design. The premise that the 10th Angel would have two forms—one with a "vestigial" body, the other more humanoid—seems to have been present early on. That the Angel would develop a feminine body was established later in the process, however, at Anno's insistence. The final design for the 10th's second form was prepared by Takeshi Honda, incorporating the mane-like cowl from a drawing by Kazuya Tsurumaki (which incidentally resembled the original Zeruel the most of the published concepts).

Zeruel appears in the fourth volume as one of the Angels attacking Tokyo-03 along side Shamshel, Matarael, Ramiel, Israfel and Adam.

Retrieved from "https://evangelion.fandom.com/wiki/Zeruel?oldid=40810"
Community content is available under CC-BY-SA unless otherwise noted.