This article contains content from the EvaGeeks.org Wiki article Yui Ikari. Please view that page's revision history for the list of authors.
This article largely borrows its content from another wiki, such as Wikipedia or EvaGeeks. Substantial cleanup and reformatting may be needed.

The Birth of NERV
Volume 8[Manga]

Yui Ikari,[1] the mother of Shinji Ikari and the wife of Gendo Ikari, was a brilliant bio-engineer who worked for Project E at Gehirn. Additionally, she is the daughter of a prominent member of SEELE.[2] She died in 2004 as a result of her Contact Experiment with Unit-01, but her spirit lives on within the Eva as eternal proof of humanity's existence.

Though seldom seen in Lilin form, Yui Ikari is one of the most powerful presences in the series. When she is seen as a human, Yui is shown to be kind, optimistic, and motherly. But the most striking part of her personality is her faith in humanity and the belief that it is worth preserving and remembering.

As a student at Kyoto University, she met her "sensei", Kozo Fuyutsuki. The nature of their academic relationship is unknown. Fuyutsuki's specialty was metaphysical biology, which has little or nothing to do with what Yui was officially studying, bioengineering. However, the two were close and she regarded him as a friend and confidant.

Relationships With Other Characters

Yui became romantically involved with a mysterious man, several years older than herself, named Gendo Rokubungi, who was constantly the source of shady rumors — among them that Gendo had approached Yui for nothing but her talent and her affiliation with SEELE. Regardless, in Yui's own words, he was "quite a sweet person. It's just that no one knows it."

After Yui (presumably) graduated, she married Gendo, and the latter took on her surname[3] He became involved with SEELE, joining the Katsuragi Expedition to serve as an auditor, although it's not said what Yui was doing during this time. After Gendo returned, they had a child together, Shinji Ikari — who, if a girl, would have been named Rei.

Yui took up work at the Artificial Evolution Laboratory in Hakone, Japan, which was really a front for SEELE's secret research organization, Gehirn. Her skills in bioengineering went towards the "Adam Revival Project", more commonly called "Project E". In 2004, Yui volunteered herself as the test subject for the Contact Experiment with the incomplete Unit-01 (a decision she had made by autumn of the previous year). She brought the 4-year-old Shinji to the site of the experiment so that she could "show [him] the bright future". The experiment, allegedly, was part of Gehirn's research into the creation of artificial souls, but it resulted in a "freak accident" instead, wherein her soul was absorbed into the Eva's Core and her body reverted to LCL. Gendo subsequently undertook a "Salvage Operation" that attempted to recreate Yui's body and fix her soul back into it, but this failed, instead resulting in the creation of the first Rei Ayanami.[4]

Yui's soul remained inside of Unit-01 throughout the series, with her son Shinji piloting it to defeat the Angels. Despite NERV's extensive system of restraints, Yui's soul could take control of the Eva's body in situations where Shinji was in extreme danger. Her control manifested itself in Berserk mode, a state of greatly increased power and savagery.

She first moved all by herself in Episode 01, protecting Shinji from falling lights and in the following battle in Episode 02, where she took control and defeated Sachiel when Unit-01 shuts down after sustaining severe damage from the Angel. In Episode 16, she made contact with her son and took control of the Eva immediately before all power to the life support systems failed, breaking out of and killing the twelfth Angel, Leliel. Finally, she manifested in Episode 19 against the fourteenth Angel, Zeruel. This time, in addition to taking control over the Evangelion and quickly defeating the Angel, she also ingested its S2 Engine in the process.

When the Third Impact arrived and Rei III rejected Gendo, control of Third Impact was given to Shinji and, ultimately, Yui. After Shinji's rejection of The Human Instrumentality Project, Yui took the Spear of Longinus and floated out towards space, becoming an eternal testament to humanity's existence, as Evangelion Unit-01.[5]

In Episode 20, Shinji goes on a spiritual journey while trapped within the Eva. During this time, Shinji overhears a conversation between his mother and father.

Gendo: He has to live after the Second Impact, doesn't he? In this hell...

Yui: If he wants to survive, anywhere could be like Heaven. He has a chance to be happy anytime because he's alive.

Gendo: I see. You're right.

Yui reveals to Gendo that she believes anyone can find Heaven; they must have the will to survive and they will attain happiness. This belief is passed on to Shinji, first in his return to the physical world in Episode 20, and later in his choice to be "alive" (existing as human in physical form with an A.T. Field) rather than accept Instrumentality.[6] Yui's beliefs may also be exemplified in her romantic relationship with Gendo, however, Gendo's desire to be associated with SEELE raised questions concerning whether he was truly in love with Yui or whether he was using her to get closer to SEELE. The fact that his every action for the next decade was made in pursuit of reuniting with Yui suggests he was not just using her; conversely, since she kept some of her agenda secret from Gendo, she may in a sense have been using him.

Yui has her own agenda, different from SEELE's, and ultimately different from Gendo's as well. Much, but not all of her agenda is presented in the series. See Theory and Analysis: Yui's Agenda for details.

Yui in Other Media

As the SIRP Manga has a lighter tone than most other Evangelion Series, Yui Ikari is not only still alive, but often used as a comedic character. She is very much the driving force in her marriage, and often assumes authority over Gendo.

As with the initial series, Yui is stated to have been killed in a tragic lab accident when Shinji was a boy. In the finale, it is revealed that Yui had survived and instead ended up being absorbed into the Tree of Y'ggdrasil, an artifact that maintains the stability reality. She kills Gendo after he attempts to force Shinji into the tree as a replacement, which leads to her own demise as well. After Yui's death, Kaworu Nagisa sacrifices himself and takes her place in the Tree.

Yui is completely absent as a character in Evangelion 1.0, although Evangelion 2.0 opens with Shinji and Gendo visiting her grave (although Gendo states that "the grave is empty as nothing remained").

Rei's body is a copy of Yui's original form, as in the original series- confirmed when Gendo sees Rei as Yui for a moment, and later when Fuyutsuki explains Rei's origins. As in the original battle with Zeruel, Yui rejects the Dummy System, which Gendo interprets as Yui rejecting him. However, there is no concrete indication as to what extent Yui is responsible for the Evangelion's behavior: The Eva Pseudo-Evolution that elevates Unit-01 to near-godlike status during 2.0's abortive Third Impact may or may not have been completely under Yui's control.

It is revealed in Evangelion: 3.0 You Can (Not) Redo, that Yui's maiden name is Ayanami (thus establishing Gendo's last name in Rebuild as "Ikari" rather than "Rokubungi") and that her soul lies within Unit-01's core, much like the original series. Yui is seen again as Fuyutsuki explains the involvement of Yui in Unit-01.

Finally, in Evangelion: 3.0+1.0 Thrice Upon A Time Gendo makes clear to Shinji that his ultimate goal and deepest desire is to be reunited with Yui for the last time, and it's also implied that he expected Shinji to understand his feelings of losing Yui by making Rei Q deliberately short-lived. Before using the Spear of Gaius to reset the world, the soul of Yui releases Shinji from Unit-01, and while being embraced by Unit-13, detroys the Evangelions fulfilling her son's wish.

Yui in the anime opening

Shinji had a vision of his mother 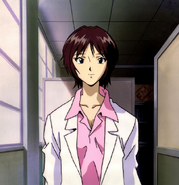 Yui talking with Fuyutsuki about Gendo

An artwork of Yui

Artwork of Yui with the cast of the series 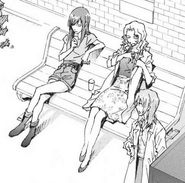 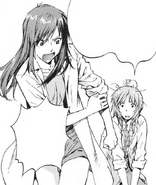 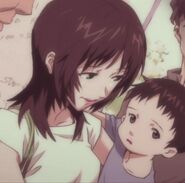