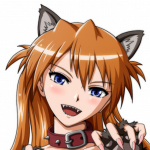 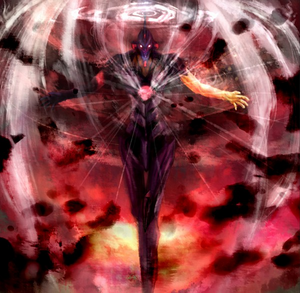 I notice you're the only active admin so I've come to offer a helping hand. As it has been a few months since the other admins have contributed, you should aim for adopting the wiki in order to achieve things that normal admins would not be able to. Moving onto my main point, I believe the wiki could use a few things such as css changes and policies. These are just a few suggestions so I hope I don't come across as condescending.

I'm home! with something in my head...

About what you said..

Thanks for the welcome!

Happy to help in any way I can. :D

On May 30th 2012 you added the following image to the Leliel wikia page: 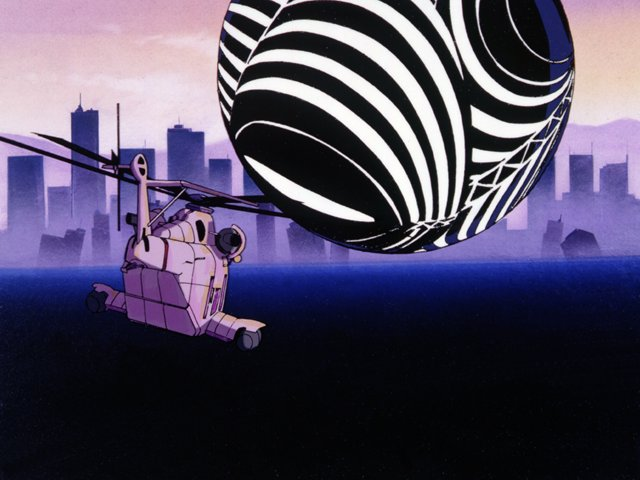 It is extremely important that you please contact me to let me know where you sourced this image from. As you may or may not be aware, Episode 16 is lower in image quality than the rest of the series due to the fact that the original 16mm negative was lost and Gainax had to use a lower quality 35mm internegative for the DVD releases instead.

Your image is of a much higher quality than what is available on any public DVD releases of episode 16. I need to know how you obtained this image. Please contact me at pwnsweet@gmail.com as soon as possible.

Hi! If you or someone else has access to the original Episode 25: Misato's ID card before vandalization appears in a flashback scene. I took down the numbers and posted them under her profile, but my resolution is not high enough that I can stand by them. Can someone double-check? Thanks! :D

So this is the first time i've looked at your page, and all i have to say is, Sir, you are a God. If I could and you were willing i'd love to chat with you about your theories of the show and learn from you about things you may have noticed and i missed or whatever. but, again. you, my friend, are a GodCrimson Royal 01 (talk) 20:42, April 22, 2014 (UTC)

Thanks alot! I Was just only trying to change her name to " Asuka Langley Shikinami" since I thought that "Asuka Shikinami Langley" was incorrect. I didn't know what I was doing lol.

I understand. Not many take kindly to the fan-fiction or fan-made stories. Re-Take is something I found very endearing and had a lot of power in it.

There have been several stories of Evangelion that have had similar powers of amazement, like Deviance or Shinji the Salvation.

But Re-Take seemed appropriate to this site because it had a lot of manga-invoking sensation. I shall leave its fate up to those that decide.

I understand. Not many take kindly to the fan-fiction or fan-made stories. Re-Take is something I found very endearing and had a lot of power in it.

There have been several stories of Evangelion that have had similar powers of amazement, like Deviance or Shinji the Salvation.

But Re-Take seemed appropriate to this site because it had a lot of manga-invoking sensation. I shall leave its fate up to those that decide.

Why do you keep undoing all the edits? If you'd look it up you'd know that the info I put is correct. Besides if the francise is over 20 years old how on earth where the charaters born in 2001? Use your brain.

Hey man this is the guy from last night that massed your page up. Sorry about that. You just got me mad ok. Because I did all the math on Mari Illustrious Makanami and how old she is. If she was born in 1982 then that makes me right Jesus. No one on the internet has said a thing about her age and finaly got it. Of course I don't know her actuall birthday but I know it has to be before August. Besides what if her birthday is April 9? Well anyways im just trying to help the fans that want to know and you keep fucking me over. It took me a long ass time to do all that math. And look at the fact I didn't put any other history about Mari. I mean come on. She even said to Rei, in 3.0 that she Knew Yui. Kind of. Please just let it stay how I edit. Now hard feelings. And can we talk about getting me unblocked. Lets do it on facebook. But no writing on my timeline. We don't want the family knowing what I said last night. Well think about it. My name is Dylan Buse look me up on facebook. Thanks for reading and again im sorry for messing up your profile page.

Hey Mav its me again. Sorry i aint been able to reply to you latley. I had other things to take care of but you actually have a good reason for doing what you did. But all of the stuff I said about Mari`s age is pretty damn reasonable when you do the math. But its your choice.

But I really think that if they just came out and said Mari was an angel or a part of the first ancestrial race it would just be BULL SHIT. I mean if Mari were an angel she could have just sat by and let 4th Impact happen or she could have helped Zeruel. And dont get me started bout how she would have had alot of chances to break through Nerv HQ and merge with Lilith. But i just said all of that stuff because thats the best the people are going to get until 4.0. And who knows ther might even be a 5.0   0.o 0.o   But it is very unlikley since they are redoing Neon Genesis Evangelion this year.

And NGE2015 Isnt going to pull that Dragon Ball Z Kai bullshit where all they do is redub it and use lame ass music (Good thing they didnt fuck up the Buu Saga`s music). NGE2015 is going to be redubed and it will be in BluRay HD or whatever the fuck its called and they are going to use a better version of Cruel Angels Thesis, im not so sure about EoE2015 though. I actually think that the Evangelion movies(1.0 2.0 3.0 4.0) are a different anime from Neon Genesis Evangelion, but the same thing. You dont have people doing the Rebuild Movies like DBGT and hatin on it by saying things like "OH 2.0 IS GAAAAAAAAAAAAAAAAAAAAY" or "YOU RETARD 3.0 ISNT EVEN CANNON" or some stupid bullshit like that (DBGT is good) So i actually hope for a brand new Evangelion manga for the rebuilds after 4.0 is released . And maby a short anime that takes place between 2.0 and 3.0.

Well what are your hopes for the future of Evangelion. And please dont block me u wont have to worry about me doing what i did to your profile that night again. Oh and thanks for agreeing to talk with me. I have to respect you for that. No hard feelings right? Please reply to me soon Mav.

Some stuff is answered