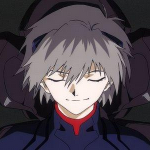 Welcome! My name is Dark-EnigmaXIII (but many refer to me as DE). I'm am, together with my dearest friend, a bureaucrat on this wiki, but dont be afraid of me! I am a hardcore fan of the Evangelion series, and so I try to put my knowledge about it and wikis in general to good use here.

I consider myself a friend to many users on the Wikis, and I cannot thank them enough for that friendship and how it has impacted my life and myself as a person.

If you have any questions or concerns, or just feel like talking with me 'cause you're bored, you're welcome to contact me on my talk page. Just make sure to follow my rules, and I will track you down to reply when I can!

I am silent editor that watchs over the wiki, following everything that is going on, even if Im not involved in it. Though no one to talk to or welcome users, I am always open to questions or request and, though my teaching skills are quite bad, I do know where to direct users in need of help.

I tend to think of me as nothing special, but the community, be them my friends or not, consider me to be an "approchable" guy. I am not the kind of guy who lash out at you at first sight, but dont approach me in a bad way, or you'll feel my wrath.

In all honesty, I dont like to talk about me. If you desire to know more, you can ask my friends down there, or discover it by yourself!.

The following despicts events that transpired at the Kingdom Hearts Wiki.

Well, I just needed a section dedicated to him.

He's just plain awesome. He's the most caring and nurturing guy I will probably ever meet. Hardworking, always ready to help... no matter how busy he is, he just cant say no to someone that need him - He never said no to me.

Back when we exchanged our first messages, he was just a mod, I was just a user. He was on vacations... and he ignored me! Could you believe it? this bastard ignored me. I was forced to ask him if there was a particular reason behind him ignoring me and not everyone else... of course, he was just oblivious. And to this day, he says he regret not having replying me sooner. I regret not having talked to him sooner. At least we did, didnt we?

Then it came the moment when we renovated the staff (An event some call DE's raising to power or The Revolution), and back then, I wont lie: I didnt vote for him, for the stuff he did with templates and the skin didnt seemed that important to me. He admits, he didnt need to be an administrator for that. But the comunity was amazed, and so we both made it to the ranks of sysop, and were forcibly brought together. Two strangers that only exchanged a few words. Imagine all the disasters bound to happen.

But... there werent. We were, by that time, the only 2 active staffers, and the list slowly became smaller. It eventually became evident we didnt agreed on everything, but we knew what we needed. I had ideas, he could implement them... slowly, but surely, we worked together. He worked more than me, I tend to believe, but he refutes it. We started talking on the IRC, more and more everyday, with that uneasy feeling you have from someone you really appreciate as a friend, but you dont know what to say. You cant give them a hug, or a playful punch trough the screen, after all - unless you can afford a new screen.

Then, the image issues between wikis. That's when I became a brighter star: the 3D models, wich I've had sitting around in my PC without clear purpose, were suddenly wanted, and my job was to provide the renders. I knew a bit of 3D animation, so I could handle myself, but there was just so much to do. And then, Soxxeh offered himself to help me. As busy as he was, with school and 3 jobs, he took the time to listen to my boring talks and learn to animate. For as long as I provided the models, he helped me. And that was a gesture of true kindness.

Rough times in my life came. My dad wasnt in the best health condition. It was expected for the worst to happen, and it happened. I was on the edge, broken and lost. My own behavior on my depression had driven my friends away. All, but one: Soxra. He stood there, and took my bitching, my cruel and demotivationals words, just so he could tell me You must go on.

We've been trough a lot together, and shared secrets that are not meant to be told to anyone, between ourselves. We once believed that should the other left, we could replace him. Now, we agree that we are nothing without the other. We're a team. Everything we do, we do it together. We've done a lot of things, and Soxra, my dearest friend: I hope we'll do even more things together.

Love ya, buddy. I really do.

Retrieved from "https://evangelion.fandom.com/wiki/User:Dark-EnigmaXIII?oldid=24525"
Community content is available under CC-BY-SA unless otherwise noted.