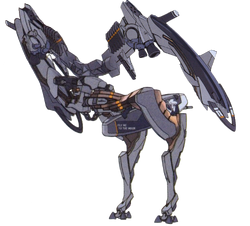 The UX-1 Allegorica (UX-1 アレゴリカ[?]) is a support unit for the Evangelion units. It appears in Evangelion: ANIMA.

This support unit is meant to combined with an Evangelion unit through the three-point plug used for the Umbilical Cable. It enables the full energetic autonomy of the Eva unit via the internal N² Reactor of the Allegorica unit as well as both atmospheric and sub-orbital space flight capabilities.

Oddly enough, the UX-1 Allegorica's design is similar to that of a Vulture and other Birds of Prey. 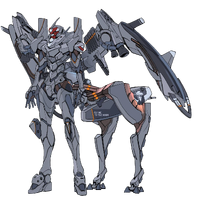 Piloted by Asuka Langley Sohryu, it is the combination of the Allegorica Armor-fitted Unit-02 Type II and the UX-1 Allegorica support unit. This makes it look like a creature that appears in Greek Mythology, the Centaur, only it has wings. Evangelion Unit-02 Type II Allegorica first sorties to reach the Moon to confront Armaros.

Piloted by Rei Ayanami, it is the combination of the Evangelion Unit-00 Type F and the UX-1 Allegorica support unit. It uses the Magoruku Exterminate Sword Stage 2, while the "Angel Spine" cannon is attached to the Allegorica unit itself.