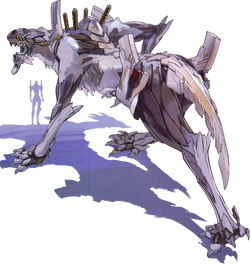 US Evangelion/Wolfpac is one of the Evangelion Units produced by the USA appearing in Evangelion -ANIMA-. It is piloted by Mari. Unlike the other Evangelion Units, it is not humanoid, but more animalistic in appearance (though despite its name, it looks more like a large cat than a wolf).

This unit's appearence has a striking resemblance to the Beast Mode of Unit-02'γ as it is also based on feline animals, having fur on parts of its body, and has limiter-like pylons on the back.

Retrieved from "https://evangelion.fandom.com/wiki/US_Evangelion/Wolfpac?oldid=32448"
Community content is available under CC-BY-SA unless otherwise noted.