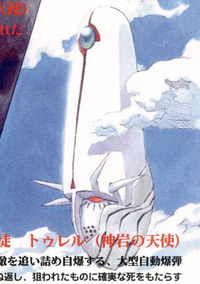 Angel of the rock of God

Turel is a conceptual Angel which never ended up being used. It is designed as a floating white "monolith" with an appearance like a face crowned by four spikes and wearing a very tall, steep miter adorned with a blue gem. It is extremely powerful, seems impervious to all attacks, and steadfastly seeks out its targets with the aim of self-destruction.

Retrieved from "https://evangelion.fandom.com/wiki/Turel?oldid=38851"
Community content is available under CC-BY-SA unless otherwise noted.