This article has a collection of images to further represent its content. To see its gallery, visit Torwart/Gallery. 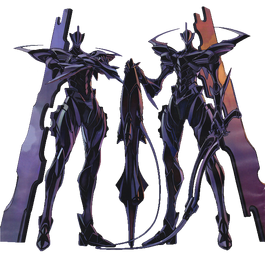 They sport a black armor with one single wing on their back. Their most unique ability is to create worldly paths to appear and disappear at will.

One of the Torwart units was destroyed by the Super Evangelion but the other one survived and reappeared with S.EVA's heart that was previously taken by Armaros using the Spear of Longinus. Because of the particular relationship between Shinji and S.EVA, the second unit acts itself as Shinji.

Retrieved from "https://evangelion.fandom.com/wiki/Torwart?oldid=32885"
Community content is available under CC-BY-SA unless otherwise noted.