This article has a collection of images to further represent its content. To see its gallery, visit T•RIDEN•T/Gallery. 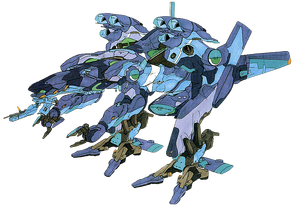 The T•RIDEN•T, designated also as a "Land Cruiser", is a man-made weapon appearing along with one of its pilots, Mana Kirishima, in Neon Genesis Evangelion: Girlfriend of Steel.

Similar to the Jet Alone series, the T•RIDEN•T was meant to be a competitor to NERV's Evangelion units in the battle against the Angels. However, like the Jet Alone, this experimental unit was a failure and ended up going berserk. It was stopped and destroyed by the Evas.

Retrieved from "https://evangelion.fandom.com/wiki/T%E2%80%A2RIDEN%E2%80%A2T?oldid=38487"
Community content is available under CC-BY-SA unless otherwise noted.