Tōji Suzuhara (鈴原 トウジ[?], "Suzuhara Tōji") is a fictional character from the Neon Genesis Evangelion franchise. He is the Fourth Child (Fourth Children in the Japanese version), selected to be the pilot of Evangelion Unit-03.

Toji is a tough boy, the stereotypical "jock," as evidenced by the fact that he is the only student in Shinji's class that refuses to wear the school uniform (although he does actually wear it once, in the ninth episode). Toji is best friends with Kensuke Aida, and is in constant conflict with Asuka Langley Soryu. Toji's younger sister, was injured in the battle between Sachiel and Unit-01, and after learning that Shinji Ikari was Unit-01's pilot, he beats Shinji up as payback. However, after witnessing firsthand the suffering Shinji experiences piloting Unit-01 in the battle against Shamshel, Toji comes to respect Shinji and the two become friends.

Unbeknownst to Toji for much of the series, his normally by-the-book class rep Hikari Horaki actually has a crush on him, which she tries to repress and disguise by bossing him around. Later in the series, she begins bringing especially big homemade lunches to school for Toji, since he loves to eat ("Toji the Stomach", as Kensuke refers to him). Subsequently, her feelings begin to come to the forefront and Toji seems to return her affection.

Toji is eventually selected to be the Fourth Children, and agrees on the condition that his sister be moved to NERV's medical facilities. En route to the testing facility, Unit-03 is taken over by Bardiel. When Toji is inserted in the entry plug and the Eva is powered up, Bardiel takes over and the Eva goes on a rampage. All the other Evas are deployed to stop Unit-03, but Units 00 and 02 are quickly defeated, and Shinji refuses orders to destroy Unit-03, wanting to try to save the pilot. However, Gendo orders that Unit-01's Dummy Plug system be activated, overriding Shinji's control. Unit-01 proceeds to tear Unit-03 to shreds and crush its entry plug. After the battle, Shinji learns that Toji is the pilot as the wreckage of the entry plug is examined. Toji survives but is critically injured, losing his left leg. Along with Kensuke and the rest of his class, he is eventually evacuated from Tokyo-3; what happens to him after that is unknown. He appears at the end of episode 26 in Shinji's subconscious.

In Yoshiyuki Sadamoto's manga adaptation of Evangelion, the English translation of Toji's dialogue gives him a distinct accent, which could be described as a "New York gangster" dialect, an English approximation of Toji's Osaka-ben dialect. He is prone to violent displays of temper (even more than in the anime) and is more verbally abusive toward Asuka, calling her a "bitch" multiple times. His interactions with Shinji are mostly identical to the anime; however, after he is selected to be the pilot of Unit-03, he confesses to Shinji that he is terrified of the task and is ashamed of his treatment of Shinji when they first met. Shinji learns that Toji is Unit-03's pilot before the battle rather than afterward, leading to his refusal to destroy the possessed Eva. Toji is also killed when Unit-01 crushes Unit-03's entry plug.

Another change was to Toji's hair color, which went from black (in the anime) to dirty blond/light brown (in the manga).

In Neon Genesis Evangelion: ANIMA, Toji is 17 and still part of NERV Japan. His severed limbs were to be replaced by new ones grown from his body cells. This was however canceled as Bardiel's infection was detected and thus he was grafted with mechanical limbs instead. His relation with Hikari has reached a point where they now kiss each other and he serves as a big brother figure for Rei Six. Toji shows himself to be a reliable field agent and right hand to now Commander Misato Katsuragi. When Misato herself falls into a trap in an attempt to learn Kaji's fate, Toji is promoted to Acting Deputy Commander, in succession to previous title holder Kōzō Fuyutsuki three years previously.

After crashing the Su-27 SMN² Platypus II, Toji woke up in an ICU room, he looked around and saw cyrillic letters and realized that he was in care of the russians, trying to scratch his head with his left hand, he saw a pale, emaciated flesh-and-blood arm connected to his shoulder unlike his cybernetic arm. Confused, he was explained by Kensuke that it was the his arm that he lost 3 years ago that they cultivated. It is revealed by Kensuke that they were scared that the Angel Bardiel would wake up and kill them all once it was connected to the true owner. Kensuke had in fact participated stealing both his arm and leg from the NERV Japan medical research laboratory. Kensuke explained that that was also the reason why they didn't reattached his real leg, that was in a cylindrical container near the bed. He also explains that he didn't stole, just used as part of the trade involving NERV Germany. Actions that were done by the Intelligence Department in secret long before he even joined them. Upon hearing this, Toji says that he barely recognizes him anymore, and Kensuke answer that he is just being logical. He asks Toji why he isn't allowed to change, why he and Shinji are able to go forward without him as he stayed of as comical relief to the group. He understood that he couldn't follow the same path as Toji or Shinji, so he decided in finding a different path. Kensuke admits that sometimes he goes too far, but he says that he will makes things right, admitting that he did something bad to Hikari. Toji asks him about his right arm, and Kensuke tells him that Toji almost left the facility with one of these, a downgrade of the one he used, a basic robotic arm that is usually donated to war-torn countries. Kensuke left the room, using his right robotic hand to make rock-paper-scissors gestures as he left.[1]

Toji is mostly the same as his anime counterpart, although he doesn't get into shouting matches with Asuka as often. He's also captivated by Rei when she arrives at the school.

Toji maintains much of his same qualities as the anime, although he was accepted into NERV early on, much like the other main teen characters.

In the fighting game Neon Genesis Evangelion: Battle Orchestra, Unit-03 (piloted by Toji) is an unlockable playable character, he also has his own story arc in the game.

Tōji Suzuhara (鈴原トウジ[?], "Suzuhara Tōji") is a fictional character from the Rebuild of Evangelion movie series.

Toji is a student that unlike other students, wears a black tracksuit with white and red details in school. He does have a short black hair and his skin is darker than the rest of his friends. He speaks in Okinawan accent and is seen usually with Kensuke. His personality is of a jokester but also serious when his relatives are involved. He speaks with an Okinawan accent.

His adult appearance is of a tall man, wearing black shoes, blue pants, with an white shirt with sleeves rolled up and a light brown blazer over it. When working, he removes his blazer to wear a white coat with a stethoscope around his neck, a pen in the chest pocket and an watch around his left wrist.

In Evangelion: 1.0 You Are (Not) Alone not much is known about Tōji's past. He lives in Tokyo-3 with his grandfather, father and little sister. His father works at NERV forcing Tōji to take care of his grandfather and sister almost alone. He attends Tokyo-3 middle school and is friends with Kensuke Aida. During the fight between Evangelion Unit-01 and the Fourth Angel, Tōji's little sister is injured by the colateral damage. Toji later, punches Shinji for piloting the Evangelion, causing Sakura Suzuhara to get hurt in the process, and when Shinji retorts, he comes back and punches Shinji again. When the Fifth Angel attacks, he and Kensuke leaves the shelter to see the Evangelion fights and gets almost killed when Unit-01 is thrown at the mountain where they were. Toji and Kensuke are ordered to get inside the Entry Plug and swim inside holding on the seat as Shinji fights the angel. Later, he understands the terror of piloting the Evangelion and regrets his actions and apologizes to Shinji. He and Kensuke leave a voice mail for Shinji telling him to be safe and good luck. This helps give Shinji confidence before the mission against the Sixth Angel.

In the second film, Evangelion: 2.0 You Can (Not) Advance Toji has become a friend to Shinji and visits the Ocean restoration project with Kensuke, Shinji, Rei, Asuka and Pen², where they see the ocean life before the Second Impact and eat food prepared by Shinji. Toji also appears visiting his little sister in the hospital after she is discharged. His last scene in the movie is when the Tenth Angel attacks and he is seen protecting Hikari, with Kensuke and Pen² as the attack happens.

Toji doesn't appear in Evangelion: 3.0 You Can (Not) Redo, although Shinji does find a shirt that has Toji's nametag.

Toji returns in Evangelion: 3.0+1.0 Thrice Upon A Time. He works as an unlicensed doctor in the Village 3, and is married with Hikari Horaki, now Hikari Suzuhara, with whom he has a daughter, Tsubame Suzuhara. He does not show any resentment to Shinji, and is very helpful and supportive of him, guiding him in his recovery, same as Kensuke, who also works for the people of the village. He is however puzzled at Rei, not initially realizing she is not the same Rei they knew, calling her "lookalike". When the Wunder arrives to pickup Asuka and drop mantiments, he insists that Shinji stay there and live with them. He is last seen hugging Hikari and Tsubame as the waves clash against the sealing pillars.

Everyone, except Shinji, is shocked about the revelation of Kaji and Misato's past relationship

Toji, Shinji and Kensuke surprised to see Asuka in their class

Artwork of Toji with a Plugsuit

Artwork of Tōji, from the Shinji Ikari Raising Project

Concept artwork of Tōji, Kensuke, and Hikari, as Evangelion pilots

Sketch artwork of Toji and the cast of the series

Artwork of Toji with the cast of the series 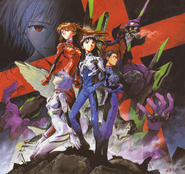 Artwork of Toji and the Evangelion pilots for Death & Rebirth 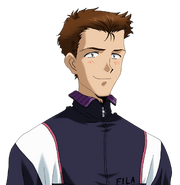 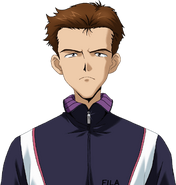 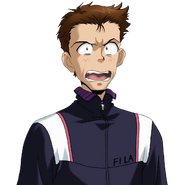 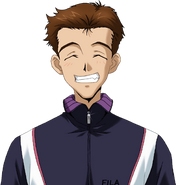 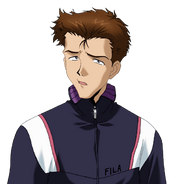 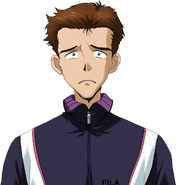 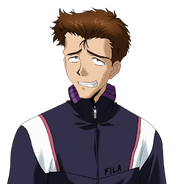 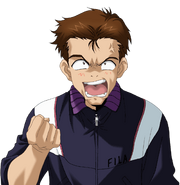 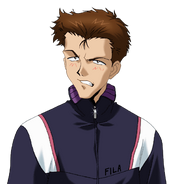 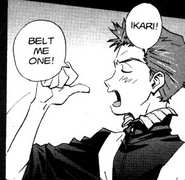 Tōji, as seen in the manga

Toji on the cover of the Section 2 Chapter 4, illustration by Utatane Hiroyuki.

Toji and the Children at the research aquarium
[RB2]

Tōji with his sister
[RB2]

Artwork of Shinji, Rei, Tōji, and Kensuke for Evangelion 2.0.

Artwork of with Toji, Kensuke, Shinji and Rei, illustration by Kazuya Tsurumaki.

Artwork of Toji with the children.

As seen on Evangelion Battlefields.