This article has a collection of images to further represent its content. To see its gallery, visit Super Evangelion/Gallery. 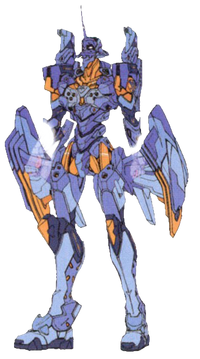 Super Evangelion is a unit appearing in Evangelion -ANIMA-. It is piloted by Shinji Ikari.

This unit is an evolution of Evangelion Unit-01. It still bears the iconic purple and neon green color scheme of the Eva-01 but however has more orange details throughout its body. The S.EVA's armor, being derived from the F-Type Equipment is more bulky and more ornate.

It was created when Shinji, in the Unit-01 Type-F was shot at point-blank by Rei Quatre in her 0.0EVA (Quatre). Everyone thought Shinji to be dead but as Yui appeared before him, his body and soul merged together with the Unit-01. It then started to rebuild itself, creating the Super Evangelion. His soul is now linked to the S.EVA to the point that it could be considered Shinji's second body.

One of the primary focus of the design of the Super Evangelion unit is to adapt the changes caused by the ingestion of the S² Engine by the Eva-01. The technology of heat management, first tested on the components used by the Evangelion Unit-01 Stage 2 Specification via the its F-Type Equipement configuration, is now perfectly applied on the armor of the unit, due to the use of parts and technologies found on the Mass Production Evangelions. In the end, one could say that the Evangelion Unit-01 has finally become one with the S² Engine.

The head is also a noticeable feature of the unit. Where the previous versions of the Unit-01 used transparent eyecover, the forehead portion of the helmet now moves down to protect the eyes of the Evangelion (similar to the helmet popping mechanism of the NGE-version Evangelion Unit-02). When this mechanism is activated, the Entry Plug field-of-vision's camera feed is changed from the eyes of the S.EVA to the secondary camera located on each side of the "cheek" parts of the helmet.

Although the changes to the Eva-01 were planned for quite a long time, the fact that the unit self-regenerated itself and evolved when it was critically damaged made the NERV technical department have to change the Stage 3 modifications to better fit the new Evangelion. Those changes also lead to various tests of experimental equipments using particle transfer, like the Vortex unit which enables the flight of the S.EVA (when equipped with the Vortex unit, the unit's armor's color is slightly altered, as the neon green details are replaced with baby blue details). These researches are meant to perfect the use of a particle jump-use power supply (making the power of the S² Engine directly transfered to the components, instead of it being changed first into electricity; this would make the entire system more efficient in theory). Those experiments are considered the "Stage 4" of the Evangelion Unit-01.

All of those experiments will eventually lead to the development and the creation of the Super Evangelion Final Stage, the ultimate of the technology used on Eva-01. This results in a more sleek armor with more black details and a new, foldable backpack derived from the Vortex which the S.EVA uses to fly.

As a Stage 3-Evangelion, it makes use of Stage 2 equipments as its standard weapons.

Retrieved from "https://evangelion.fandom.com/wiki/Super_Evangelion?oldid=32883"
Community content is available under CC-BY-SA unless otherwise noted.