This article contains content from the EvaGeeks.org Wiki article Spear of Longinus. Please view that page's revision history for the list of authors.
This article largely borrows its content from another wiki, such as Wikipedia or EvaGeeks. Substantial cleanup and reformatting may be needed. 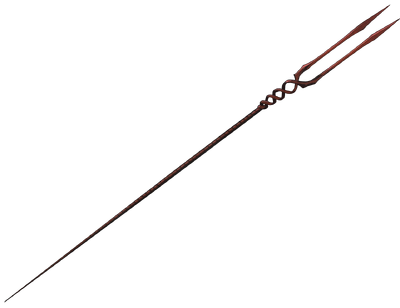 Spear of Longinus (ロンギヌスの槍[?], "Ronginusu no Yari") also called the Lance of Longinus is an extraterrestrial artifact with the power to penetrate any Absolute Terror Field and immobilize beings of god-like power.

The spear of Longinus is a long, red, two pointed trident (bident) with a clear double-helical shape carrying throughout its body. The spear is extremely long, standing taller than an Evangelion unit with most of its length coming from its shaft where the double-helical shape is tightly wound before gradually splitting apart to form the two massive tines.

While the spear generally takes on its bident appearance, it also has metamorphic capabilities seen when used against the Angel Arael. After being thrown, the tines wrapped together to form a seamless piercing object after contact with Arael's A.T. Field, the "flaps" of the Spear open up revealing white, gill-like structures that appear to aid the spear with self-propulsion under conditions of extreme resistance. Finally, the Spear's bident shape is perpetually altered by Unit-01 at the start of third impact when she separates the two helices, and the Spear takes on a form reminiscent of a horizontally elongated infinity symbol, ∞.

This artifact also appears in the Rebuild of Evangelion continuity however its uses and origin is unclear and there are 5 spears as opposed to the two seen in Neon Genesis.

SEELE is able to create nine copies of the Spear of Longinus for use by their Mass Production Model Evangelions. The copies have most of the original's properties, such as its size and dimensions, along with its ability to pierce A.T. Fields, although they are bluish grey in color rather than red. Also unlike the original, they cannot be used to initiate Instrumentality with Lilith herself. Even after the original Spear was lost, SEELE felt they still had a chance, albeit more difficult, of initiating Third Impact, by using the replica Spears and Unit-01 (itself created from Lilith), though it is possible that even SEELE wasn't entirely sure if this would be sufficient (this remains unknown as the original Spear then returned to Earth).

The metamorphic capabilities observed in the replicas exceed that of the original: When the Eva Series are first sortied in 25', their Spears are initially disguised as massive, double-edged blades that bear no resemblance to their native forms. The weapons' true nature is revealed when one comes in contact with Unit-02's A.T. Field and, within seconds, responds by morphing instantaneously into its Spear shape. When the Spear copies are destroyed, they initially bubble up into LCL-colored masses with little lower bodies projecting out of them (as per Lilith on the cross). According to the storyboards, this substance actually is LCL.

Officially, the "double-edged blade" variation of the Spear copies goes by two different names. The script refers to them as 重い槍 (omoi yari), or "Heavy Spear". However, this term is rarely observed elsewhere, and 大剣 (ooken), or "Giant Sword", is seen in its stead.

The Spear may be considered to be a weapon of "god-like" power. N² weapons have enough destructive potential to bring minor to moderate amounts of damage upon some of the weaker Angels; and Evas can use armaments against Angels after nullifying the Angels' A.T. Fields with their own. However, the Spear of Longinus is capable of piercing the active, unneutralized A.T. Field of any Angel or Evangelion, entirely by itself.

The Spear is not of Terran origin, having been created by the First Ancestral Race, an ancient extraterrestrial humanoid species. The one seen in the show is also not the only Spear of Longinus created: Every Seed of Life, including both Adam and Lilith, was sent with a counterpart Spear, meaning seven in all.[1] At least one established function of the Spears is that of a "security device" capable of safeguarding the First Ancestral Race's plans should they somehow be compromised.

Spears of Longinus are technically alive and are even said to have wills of their own. The Spear featured in Evangelion belonged to Adam, whereas Lilith's is believed to have been lost or destroyed during First Impact.

When the First Ancestral Race cast out the seeds of life, each contained a spear of Longinus intended to in some way control or restrict the power of the ententes contained within. Of the seeds cast out, two landed on Earth. Of these seeds, the first to land was the White Moon containing Adam, however before Adam-based life could be established, the Black Moon containing Lilith crash-landed on Earth. This collision, known as the First Impact, destroyed the spear brought along with it. Due to an unspecified law in the First Ancestral Race's plan[2], Adams spread of life was locked by his spear allowing life born from Lilith to be born.

In the year 2000, the Katsuragi Expedition unearthed Adam and the Spear in the Antarctic. The Spear was removed, briefly relocated to the Dead Sea region, and then shipped back to the South Pole in preparation for the Contact Experiment. After the experiment led to unforeseen consequences, the team attempted to wield the Spear against Adam to "reseal" it, but they failed. In classified video footage of the incident, scientists can be heard shouting off-screen that the Spear needs to be 'pulled back', and that it's "sinking in".[3] Second Impact could not be averted, and, ultimately, the Spear appears to be responsible for causing Adam's retroversion to an embryonic state.[4]

The Spear first appears in the series in Episode 12 under wraps as it is transported from the Antarctic to NERV on the flight deck of an aircraft carrier.[5] It reappears at the end of Episode 14 as Rei is ordered by Gendo Ikari to go into Terminal Dogma to insert it into Lilith, the result of which is seen in Episode 15. It remains there until the battle with Arael, upon which Rei once again descends to collect it from Lilith in order to destroy Arael, which was floating in outer space high above Earth's atmosphere.[6]

It finally returns in Episode 26' after reacting to the awakened and freed Evangelion Unit-01. It proceeds to become an important tool for the Human Instrumentality Project and merges with the Eva, creating the Tree of Life. However, after Shinji Ikari rejects the process, the Spear is regurgitated, destroys the copies used by the Mass Production Evangelions and leaves Earth accompanied by Unit-01.

When Misato takes Shinji into terminal Dogma to show him what they are fighting to defend, Second Angel Lilith is seen being impaled being Spear of Longinus. The reason at the time for this is unclear.

During the battle at Bethany Base, the weapon wielded by Unit-05 is referred to as "Anti-Angel Extermination Weapon Spear of Longinus Basic Type (Pseudo-Restoration)". While the weapon does not resemble a spear sharing more resemblance with a lance, the name suggests some sort of connection to the set of spears.

Later during a flashback to second impact, four Spears of Longinus[7] are shown along with four Adams suggesting each came with a spear.

While it was thought there were only four Adams and therefore four spears of Longinus, it is confirmed that there are actually five spears of Longinus all along, all but two which had been previously destroyed as a part of Gendos plan.

After taking both the remaining spears into the Minus Space using Evangelion 13, one of the spears is claimed by Evangelion Unit-01 and transformed into a new Spear of Cassius. The Spear of Longinus is then described to be "The Spear of Despair", as opposed to Cassius being the spear of hope before the two begin to battle. After Unit-01 forfeits its spear, Evangelion Imaginary appears before Shinji and Gendo and the spears fused with it, destroying them to form a new Lilith.

In the artbook released with the game Evangelion Detective, there are four different designs of Spear of Longinus: Type A, Type B, Type C and Type D, with different designs to the tip and the arrangement of the body.