First Lieutenant Shigeru Aoba (青葉 シゲル[?]) is a fictional character from the Neon Genesis Evangelion franchise. He is one of the three main computer technicians at NERV Headquarters, along with Makoto Hyuga and Maya Ibuki.

Aoba is an avid guitar shredder and is seen carrying a guitar case when in civilian life, like in Episode 11. Even in NERV Headquarters, Aoba shreds air guitar when he is not on duty, as well as read guitar magazines.

Aoba is a bit of a nihilist and a little cynical, scoffing at Maya Ibuki's absolute faith in the technology of the age, seen in Episode 11, and having no second thoughts about firing on JSSDF soldiers in Episode 25'. But he gets along well with his co-workers.

During Third Impact, the transition guides appeared to everyone around the world as a person they loved or trusted, their touch transforming the person into LCL. Aoba, however, experienced only a horde of naked Rei Ayanami, from which he cowered under his desk until he was touched, as Shiguru never loved anyone.[1] The fact that the Reis are giggling insanely may imply that they are the destroyed Tank Reis from the Dummy Plug Plant, but it is doubtful that Aoba knew of their existence, and he certainly isn't taking comfort in their appearance.

In Neon Genesis Evangelion: ANIMA, Aoba is in the combat control section of the newly formed NERV JAPAN.

Shigeru Aoba (青葉シゲル[?]) is a fictional character from the Rebuild of Evangelion movie series. He hold the ranks of First Liteunant and is one of the three main computer technicians at NERV Headquarters, alongside Makoto Hyuga and Maya Ibuki.

Shigeru is an adult man. He has shoulder length brown hair that he leaves constantly loose while still shaving his face. As a member of the NERV, he wears the usual male uniform, a beige jacket closed by a blue triangular button with a rigid stand-up collar. There are two orange bands on his shoulders. Underneath his jacket, he wears a dark undershirt. The pants match the jacket color.

Aoba is an avid guitar shredder and is seen carrying a guitar case when in civilian life. After 14 years since Near Third Impact, he grew a goatee, and is more matured compared with the previous movies.

In the first two Rebuild of Evangelion movies, the story of Aoba is the same as the original series with minor changes in 2.0. In 3.0 Aoba is now a member of WILLE, fighting NERV alongside his colleagues under the command of Misato Katsuragi aboard the AAA Wunder, he manifests a grudge against Shinji the first time he sees him after the fourteen-year timeskip following Near Third Impact.

In Evangelion: 3.0+1.0 Thrice Upon A Time, he is still a member of WILLE, he prepares himself to Operation Yamato by shaving his goatee and wearing the blue armband used by WILLE members. During the operation, after Asuka injects the angel blood into New Unit-02α, he is the one who confirms that Pattern Blue is detected, having the readings of the Ninth Angel inside NERV HQ. He is also present when Sakura Suzuhara shoots Misato and also stood when Mari left with Shinji aboard Evangelion Unit 08 + 09 went to look for Evangelion 13 in the Anti-Universe.

He is last seen inside one of the five escape pods inside the AAA Wunder, besides Koji Takao. At last we see the location where the escape pods arrived, near the N109 Tower inside the NERV 2nd Branch ruins, north of Kensuke's cottage.

Aoba in the opening of Neon Genesis Evangelion

Aoba in the command center

Aoba and the other NERV's members

Aoba and the other NERV's members after the battle with Israfel

Shigeru with Makoto and Maya after Kaworu's death

Aoba hides from the Rei images 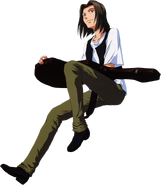 A render of Aoba

Sketch of Aoba and the cast of the series

Artwork of Aoba and the cast of the series 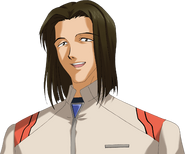 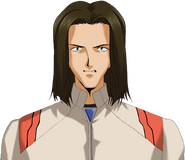 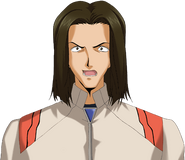 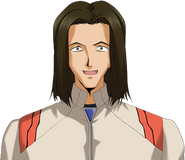 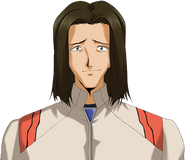 Artwork of Hyuga in Evangelion 3.0

As seen on Quiz RPG: The World of Mystic Wiz game