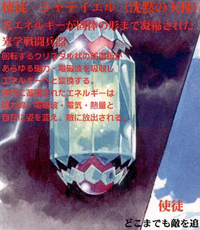 Shateiel is a conceptual Angel which was never used. It is designed as an "optical combat weapon" enshrouded by a rotating, crystal-like, multifaceted plate. It absorbs and stores electromagnetic energy, which it can then convert and use in attacks. The converted energy is apparently released through the core-like orbs on either end of its symmetrical body. It may have been inspiration for the angel Ramiel

Retrieved from "https://evangelion.fandom.com/wiki/Shateiel?oldid=34061"
Community content is available under CC-BY-SA unless otherwise noted.