This article largely borrows its content from another wiki, such as Wikipedia or EvaGeeks. Substantial cleanup and reformatting may be needed.
This article contains content from the EvaGeeks.org Wiki article Shamshel. Please view that page's revision history for the list of authors.

This article has a collection of images to further represent its content. To see its gallery, visit Shamshel/Gallery.

The Angel of the Morning 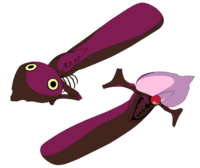 Shamshel is a roughly Evangelion-sized cephalopod-like Angel capable of transforming between a horizontally oriented "flight form" and a vertically oriented "combat mode". Its offensive weapons are two long, glowing, pink energy-tentacles. The tentacles, which are strong enough to lift an Evangelion off the ground and throw it a large distance, also have power to pierce an Evangelion's torso with little effort. Its skin is mostly purple, with some pink sections underneath its "head". Shamshel appears to have two false eye spots on the top of its head composed of an inner black circle and outer yellow ring.

Shamshel has two main arms, from which its long energy-tentacles extend. The Angel's core is located on its torso just underneath its head. It also has eight small, insect-like legs situated underneath its "head", situated just below its core. The energy whips are actually physically structures; they're not just made of energy, though they are charged with energy, as can be seen when they power-down after Shamshel dies but are still physically present.

When Shamshel switches from its flight-form to its battle-form, its large front arms (which the energy-tentacles come out of) change form as well. They don't just separate and change position (when in flight-form they are touching each other), but actually change shape somewhat.

Shamshel appears more aggressive than the preceding Angel, Sachiel. While Sachiel took largely to a defensive standpoint after the damaged Unit-01 went berserk and attacked it, Shamshel was much more aggressive in attacking Unit-01, severing the umbilical cable and flinging the Eva all the way onto a mountainside before moving to attack it again.

Shamshel appears over the ocean and makes landfall at Odawara before heading for Tokyo-3, easily passing through all defensive emplacements.

Using Unit-01, Shinji tries to shoot Shamshel with his Pallet Rifle, but fails to neutralize its A.T. Field and only ends up obscuring the target with smoke. Shamshel then strikes out of the smoke, lashing out with its energized whips, destroying the palette rifle and driving Shinji into a panic. The Angel proceeds to drive back the Eva, ripping apart buildings with its energy whips in the process. Unit-01's umbilical cable is also severed with the destruction of one of the buildings (it might have been the electrical building the Eva was connected to), before an energy whip grabs his leg and throws him high into the air, into on a nearby mountainside.

Unit-01 grabs Shamshel's energy tentacles in his bare hands, sustaining severe burns before finally flinging the Angel away. With Unit-01 running out of power, and ignoring orders to retreat, Shinji charged the Eva down the mountainside at the Angel and stabbed its core with his progressive knife, while Shamshel impaled Unit-01 on its energy tentacles. Ultimately Shamshel's core cracked and it died, almost the same time the Eva ran out of power. Shamshel's body was left behind as an almost fully intact specimen of an Angel.