This article has a collection of images to further represent its content. To see its gallery, visit Sandalphon/Gallery. 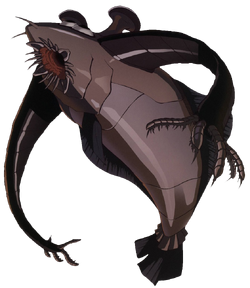 The Angel of Embryos

Sandalphon was the 8th Angel. It was discovered when still in its embryo stage, inside an active volcano.

Asuka was given a modified Plug Suit to survive the intense heat, and was sent in with Unit-02 to retrieve it. Sandalphon became active during the final stage of retrieval and was destroyed in the ensuing battle with Asuka. It was defeated by the Progressive Knife that Shinji dropped Asuka after being pumped full of coolant to overcome its heat and pressure hardened body.

This "recent hatched" Angel has a very aquatic and weak form, it is unknown if it has a developed Core or can generate an A.T. Field. The Angel is initially discovered in an embryonic state, vaguely resembling a human embryo and encased within a dark, elliptical cocoon-like object. When Sandalphon prepares to hatch, it vocalizes in the same manner as a human baby (however distorted) and proceeds to rearrange its mass into a new form. (The transformation is obscured by a blurry distortion, a convention in the show typically used to indicate the employment of an A.T. Field.) Its adult form is flattened, finned, and overall fish-like, similar to that of a Cambrian Anomalocaris. It can stand at high temperatures, like inside of an active volcano, even with its mouth opened.

Retrieved from "https://evangelion.fandom.com/wiki/Sandalphon?oldid=32584"
Community content is available under CC-BY-SA unless otherwise noted.