This article has a collection of images to further represent its content. To see its gallery, visit Sahaquiel/Gallery. 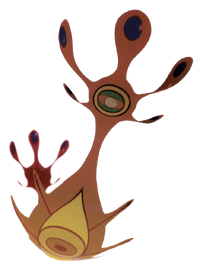 Angel of the Sky

Sahaquiel is the 10th Angel of the anime and manga.

Sahaquiel first appeared in low-earth orbit. The Angel's jamming ability prevented NERV HQ from contacting Commander Ikari or Sub-Commander Fuyutsuki in Antarctica. When NERV attempted to analyze the Angel, it crushed the scanning satellites with its AT field (although they were able to complete the scan). Attempts to destroy the Angel using N² bombs utterly failed. The Angel began dropping pieces of itself onto Earth. The first hit landed in the middle of the Pacific Ocean (far from Tokyo-3) but with each successive hit the Angel's aim improved. For the final blow, the attack that would land on NERV proper, Sahaquiel intended to drop its entire body onto Tokyo-3. The resulting blast would have been so powerful that Tokyo-3 would have been transformed into an extension of the Pacific Ocean.

Sahaquiel was intercepted and killed through the combined efforts of all three Evas. Unit-01 first stopped the Angel's physical descent by "catching" it as it fell, then as all three Evas held it off the ground, Unit-00 canceled out its AT field, negating both of its main means of attack and then Unit-02 killed the Angel by stabbing its core with a Progressive Knife.

The Angel is a massive and bizarrely-shaped creature. It has an elongated body, with three eye-like markings (one in the center, surrounded by what appear to be six "eyelashes" and one on either end of the body), and three stem-like growths projecting radially at both ends. Sahaquiel's A.T. Field is comparatively powerful, able to shield the Angel from several N² bombs. It also seems to have an ability to jam satellite communications. The Angel's most devastating weapon is itself: utilizing both kinetic energy and its A.T. Field, it drops pieces of itself onto Earth as bombs. Its core appears as the pupil of the central "eye". It likely dropped pieces of itself instead of its whole mass at first to ensure its final landing would not be a failure and off-course.

The Neon Genesis Evangelion Proposal presents an earlier concept for Sahaquiel's design, here the Angel's body is composed of what seems to be a single core-like structure. Two long, tendril-like, flat appendages are attached to it and serve as cutting devices in a similar fashion to Zeruel's.

Retrieved from "https://evangelion.fandom.com/wiki/Sahaquiel?oldid=40748"
Community content is available under CC-BY-SA unless otherwise noted.