This article is about SEELE from Neon Genesis Evangelion. To see the version from Rebuild of Evangelion, see SEELE.

SEELE (German for soul) is a secret and mysterious organization with influence over world governments and organizations in the Neon Genesis Evangelion franchise.

SEELE strive to accomplish the Human Instrumentality Project - the goal of uniting the human race as one, thus ending all the wars and individual struggles of mankind. The Seed of Adam (the progenitor of the angels) was the original seed to arrive to Earth, but because of the arrival of the Seed of Lilith (the progenitor of humanity), Adam's seed was inactivated, so SEELE views Humanity as the false successors of Earth, and the Angels as the true successors, the sons of God, and for that Humanity is burdened by the "Original Sin" because it should never have existed. They work to destroy the Angels, then unite all humanity as one and sequentially unite with Lilith and Adam, so that they can become part of God—the next stage of existence.

SEELE's original plan to accomplish this was to make Kaworu the Seventeenth Angel, the carrier of Adam's soul, merge with Lilith, causing the Third Impact. This would, with the help of thirteen Evangelion units, accomplish the Human Instrumentality Project. But the loss of Eva Units 03 and 04 and the delay of Units 05 and 06 lead SEELE to the construction of Mass Production Evangelions controlled by Kaworu Dummy Plugs.

The death of Kaworu made SEELE conclude that Kaworu wasn't the "successor of life" after all. This was further justified by the Dead Sea Scrolls, since it didn't foresee anything of this. SEELE agreed, from there on, that they wouldn't borrow the power of the angels anymore to help accomplish their plans.

The only known members of SEELE are Keel Lorenz (original German name spelling: Lorenz Kiel) and other fourteen unknown men (four being the representatives of the Instrumentality Committee); all other SEELE-affiliated people and groups have no official power in the organization. Speculation is that they are some sort of A.I similar to the Magi; or that they are human beings similar to Kaworu Nagisa or Rei Ayanami who hold ties to Adam and Lilith.

SEELE runs NERV by the name of the Instrumentality Committee, a meeting consisting of five SEELE members, including Keel Lorenz, who officially represents the United Nations. The Instrumentality Committee members are shown for their meetings, with each associated with a different color; however, for official SEELE meetings, images of large stone monolith marked "SEELE <member #> Sound Only" are projected instead of the images of the actual members.

It is presumed that Keel Lorenz, SEELE 01, is SEELE's leader or acts as the president of the council, since he's the one who speaks more and on behalf of the whole organization. The number of members in SEELE meetings varies each time, normally being only twelve but sometimes reaching to the total of fifteen members and the minimum of seven. 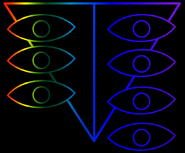 A typical SEELE meeting with Gendo and Fuyutsuki.

The Committee from an aerial view, featuring Gendo Ikari