Rebuild of Evangelion (ヱヴァンゲリヲン新劇場版[?], "Evangerion Shin Gekijōban", Officially: Evangelion: New Theatrical Edition) is a series of four movies by the creators of Neon Genesis Evangelion, which form an alternate retelling of the original TV series. "Rebuild of Evangelion" constitutes a separate continuity from the continuity of the original TV series and associated movies, Death and Rebirth and The End of Evangelion. The first film in the series was released in Japan on September 1, 2007; the second on June 27, 2009; and the third on November 17, 2012. The fourth and final film was released in Japan on March 8, 2021. 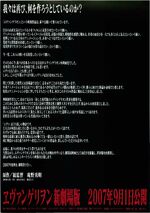 On February 17, 2007 series creator Hideaki Anno released an official statement in a form of a movie poster that was shown in 50 cinemas in Japan, providing an explanation for his motivations in creating a new version of the franchise, and stating that the release date for the first film in Japanese theaters was September 1, 2007. The english name of the movie series was Rebuild of Evangelion, which would be later dropped in favor of Evangelion: 1.0 You Are (Not) Alone and Evangelion: 2.0 You Can (Not) Advance.

Many who worked on the original Evangelion production team returned to work on Rebuild. Hideaki Anno has written the script for the first movie and has been the general director and manager for the entire project. Kazuya Tsurumaki and Masayuki have been working on directing the movies while Yoshiyuki Sadamoto provided character designs and Ikuto Yamashita provided mechanical designs. Shinji Higuchi and Tomoki Kyoda provided storyboards for the first movie.

Major differences include that while Kaworu Nagisa was originally introduced very late in the series in Episode 24, in Rebuild of Evangelion he was present in the first film. In addition, a new girl named Mari appears starting from the second film.