This article contains content from the EvaGeeks.org Wiki article Ramiel. Please view that page's revision history for the list of authors.

This article has a collection of images to further represent its content. To see its gallery, visit Ramiel/Gallery.

The Angel of Thunder

Ramiel (ラミエル[?]) (Hebrew: רעמיאל) is the Fifth Angel, one of the largest and second most powerful. Ramiel becomes the first Angel to physically penetrate the Geofront when its drill bit breaks through the armor. It is defeated during Operation Yashima (ヤシマ作戦). 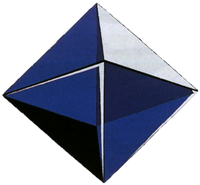 Compared to the Angels which preceded it, Ramiel has a drastically different form and does not appear to be "alive" in a conventional sense, it appears to be a gigantic floating crystalline octahedron (two pyramids attached at the base, one on top and one on bottom). The surface of Ramiel is blue and highly reflective. A choral voice is heard singing a single F note repeatedly as it moves.

The Angel has a deadly directed beam attack capable of melting through an Evangelion's armor in seconds, and it can sustain the blast for a very long period of time, perhaps indefinitely. While most other Angel attacks remain inexplicable, Ramiel is shown activating an "Inner Torus Reactor", a type of nuclear fusion reactor, to power the beam. The beam is capable of hitting any target within the Angel's firing radius with perfect accuracy, and the Angel itself is capable of detecting threats coming up from underground as well as beyond its normal firing range. The potency of its attack makes Ramiel too dangerous to engage in direct combat with an Evangelion.

In addition, Ramiel has one of the strongest A.T. Fields of all the Angels, so strong that the naked eye can see it refracting light when it attacked.[1] The A.T. Field is quoted as needing a massive 180 million kilowatts (1.8 X 1011 watts) to penetrate. Combined, these potent defensive and offensive abilities make Ramiel a veritable flying fortress. Ramiel also possesses a drilling appendage which it can extend out of its main body, which it uses to drill straight down into the GeoFront itself.

However, the Angel is indeed biological. In the shots of the Angel being demolished in the following episode, bloody red squares are seen where the Angel's armor/surface structure is being taken off, indicating that it does have blood.

Ramiel approaches Tokyo-3 by flying in from over the ocean. Unit-01 was sortied to attack the Angel on the surface, without any prior intelligence on the Angel's abilities. Ramiel detected the Eva even before it reached the surface and powered up a deadly particle beam that shot straight through a building and nearly melted through the Eva's chest armor. The pilot, Shinji Ikari, was almost killed inside his entry plug.

Ramiel proceeded to use a large drill-appendage to begin drilling through the armor plating of Tokyo-3 to reach NERV HQ below in the GeoFront.[2]

Subsequent experiments, including the use of an inflatable dummy Unit-01 and an attack with a Type-12 mortar, determined that Ramiel's particle beam targeted any threat within a particular radius, with perfect accuracy. Ramiel's AT field was also the most powerful ever observed when it was encountered, strong enough to visibly warp light when fully deployed.

Realizing they could not get an Eva close enough to Ramiel to neutralize its AT Field, Misato came up with a plan to channel the entire electrical output of Japan into an experimental new positron rifle, which Unit-01 would fire while Unit-00 provided support. While Unit-01 sniped Ramiel, Unit-00 protected their position with a specially converted "shield" made from the heat shield on the underside of an SSTO spacecraft.[3]

Ramiel reacted to the Evas by firing its energy beam at the same time that Unit-01 fired its first shot; the two energy beams warped each other as they passed by and caused both to miss. Ramiel's second shot was blocked by Unit-00 with its shield, but its shield could only hold for so long and it was badly damaged. However, Unit-01's second shot pierced Ramiel, destroying it.

Ramiel serves the same purpose in the manga as in the anime and the fight is nearly identical, both ending with Shinji rejecting his orders and ending the fight at the last second.

Ramiel appears in Stage 70-71 of Shinji Ikari Raising Project as a program created by SEELE to infiltrate the MAGI system. Inside the virtual space, it exhibits similar behavior to its Angelic counterpart - it attacks anything entering within its range and uses a drill to break into MAGI. The manga mirrors the anime in that the staff of the Artificial Evolution Research Facility program a rifle that Shinji is to shoot at the program's core. However, the gun is not ready before the program starts its infiltration and Gendo enters the virtual space to take it on, giving his staff enough time to complete the gun. As in the anime (though with the pilots instead of the Evas taking on the role), Shinji attempts to shoot the target while Rei shields him alongside Asuka. Shinji succeeds but the program's final attack results in embarassing damage to Rei and Asuka's plugsuits.

In this manga, Ramiel serves as the initial antagonist. It is the initial battle between Ramiel and the Guardians that draws the protagonist Shinji into the group. Appearing in two separate forms, first as a young man and later a young woman before having its core taken by Kaworu Nagisa.

In this version Ramiel lives up to it's title as the Angel of Lightning, using powerful electrical attacks and spawning large black wings from its back.

Ramiel's design[4] has remained largely unchanged through production, being a reflective blue octahedron even during the proposal stage. The only actual changes made were in coloration and the removal of the smaller triangular surfaces floating over each face of the octahedron.

The planned battle with Ramiel was largely the same as that which appears in Episode 06 and Rebuild of Evangelion, with Shinji getting defeated and NERV having to mount a major operation to defeat the Angel.