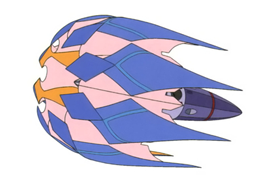 RS Hopper () are defensive weapons belonging to the Rebuild of Evangelion movie series. Those are introduced in Evangelion: 3.0 You Can (Not) Redo.

RS Hopper are small, drone-like objects designed to support and defend Evangelion 13. Each unit has two sections, the main body and the shielding which deploys once activated. In total, four RS Hoppers are seen being used by Evangelion 13.

The main body of each unit is relatively small and mandorla shaped. While its mostly the same shade of dark purple as Evangelion 13, they have a distinct lavender band down the center with two dark red bands near each point. The body is also covered with several black indents which serve an unknown purpose.

In preparation to deploy an A.T. field, the front of each unit is covered by a shielding which has a more ethereal look in both color and shape. The shielding itself has two sections comprising of a clear orange, umbrella shaped section covered by eight blue tendrils with purple tips which stretch from the front of each unit to the back. Each tendril is made up of two overlapping diamonds which gives the shielding as a whole a diamond shaped pattern alternating between its two colors. When the RS Hoppers move, their tendrils swell and contract, similarly to a jellyfish.

Due to its dual pilot system, Evangelion 13 is unable to independently generate an A.T. field and so the RS Hoppers exist to cover this clear weakness by being capable of generating artificial A.T. fields which the pilots of Evangelion 13 are able to control for defensive or offensive use. To accomplish this function, the units are capable of omnidirectional powered flight allowing them to freely move in space to protect 13 from any angle of attack.

One weakness of the RS Hoppers is their apparent inability to continuously generate A.T. fields, needing time to recharge between fields. This weakness is somewhat alleviated by the sheer quantity of units deployed, however it still means the individual hoppers are vulnerable unless carefully protected, especially since their bodies seem to be especially weak.

In storage and during most of their deployment, only the main bodies visible however once the units are ready to deploy and A.T. field, the shields appear indicating they're ready for use. After the fields are deployed and dispersed, the shielding once again disappears.

After Evangelion 13 is activated, NERV sends it to Terminal Dogma to retrieve the Spears that were located in the bodies of the Second Angel Lilith and Evangelion Mark.06. Shinji Ikari and Kaworu Nagisa are the pilots of Evangelion 13. As the two boys arrive in front of their objective, Evangelion Unit-02'γ, piloted by Asuka Shikinami Langley, attacks by surprise. Fortunately, the RS Hopper deploys from 13's shoulder pylons and generates an A.T. Field to protect it.

During their battle, Unit-02γ repeatedly attempts to land a hit without success as each would-be blow is blocked by an A.T. Field from a Hopper. As the units continue to fly around Evangelion 13, Asuka manages to find a gap in their movement allowing her to pierce the four drones in one swing, destroying them in a fiery explosion.