Neon Genesis Evangelion ~SIDE STORY #1 A Midsummer Night's Dream~ (新世紀エヴァンゲリオン外伝 ～真夏の夜の夢～[?]) is a video game based on the Neon Genesis Evangelion TV Series. It was released exclusively on Japan on the I App and V App mobile phone series in October 11, 2005. It was developed by Gainax and Tin Machine Inc. The service is no longer available.

Misato gave Shinji an order as an officer of the NERV Tactical Operations Department. An event will be held involving Evangelion pilots Rei and Asuka, as well as classmates Toji and Kensuke. What is Misato's true intention? And what's the end? 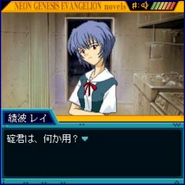 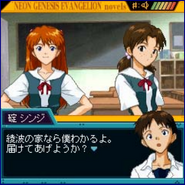