The original version was released by Gainax for Microsoft Windows PCs in 1997. Subsequently, a Macintosh version was released in response to requests from Mac users. In April 2006, a "special" edition was released for the PS2 and the PC as part of Evangelion's ten-year anniversary, with additional scenes focusing on the T•RIDEN•T pilots' lives. On April 9, 2009, a version for the PlayStation Portable was released.

As well as its official releases, the game has received multiple fan-translations. The Windows version has multiple translations in different languages, and the PlayStation Portable version has a Chinese translation. There is also an official Korean translation of the game, released in 1997.[1]

A new girl, Mana Kirishima (voice by Megumi Hayashibara, the seiyu of Rei Ayanami), starts at Shinji Ikari's school and immediately admits to finding him cute. Gradually, a relationship unfolds and they end up going on a date. It turns out, however, that she is one of three test pilots for the T•RIDEN•T Land Cruiser units Riden and Shinden, a new project for future wars similar to Jet Alone; thus the name Girlfriend of Steel. Eventually, the T•RIDEN•T goes berserk and the Evas have to destroy it.

Throughout the game, Asuka Langley Sohryu is constantly jealous of Shinji and Mana, consistent with her widely-speculated romantic feelings for Shinji. Rei Ayanami is present but plays a rather background role in the story.

The interactivity in most of the game is limited to walking around areas until the next plot event is triggered. However, the one true branch occurs at the end of the game, where the player may choose to focus on Mana, Asuka or Kaji. This choice determines which of the game's three endings are shown.

In the Mana ending, Mana is discovered not to have been killed in the battle. Shinji rescues her and brings her back to his apartment. She showers, emerges wearing only a towel, and teasingly asks Shinji if he would like her to remove it. In discussion with Misato, however, it is agreed that Mana has to leave Tokyo-3, and she says a teary goodbye to Shinji who has won her heart.

In the Asuka ending, Asuka helps Shinji to get over Mana and the two children grow closer as a result. This ending contains romantic images of Asuka and Shinji together, including a moving scene where Asuka hugs Shinji emotionally.

The third ending with Kaji does not focus on any one character as much as the other endings do. Kaji helps Shinji to meet with Mana after saying that she is still alive, they are being followed in a car by Misato and Asuka until they stop and argue. Kaji pulls out a gun and point at her, and this stand off continues until a car with Mana shows up. Shinji and Mana talk about the future and she says that one day she will come and meet again, which Shinji replies "I'll be waiting for you".

In the fourth ending featured in the PSP edition, Shinji drinks lots of coffee and is inebriated in the streets until he is found on the trash in the rain by Mana. They go to laundromat to clean his clothes while Mana tries to strip him off completely. After that, they go to some place to sleep and talk about the events involving T•RIDEN•T. Shinji is berating himself until Mana stops him with a hug and tells him to not go and that she doesn't want to lose anyone ever again. Mana tells Shinji to touch her heart and it is beating fast and she says to him to be gentle, while closing her eyes.

In the next scene, Shinji and Mana tells Toji and Kensuke that they are eloping, that are not happy to hear that, showing their concern, but understanding their decision to run away and parting in an amicable way.

Mana and Shinji meets up with Makoto Hyuga, who delivers lots of documents and papers to facilitate leaving a secret organization and starting a new life. Makoto also delivers a message from Misato wishing them the best of luck, he also tells that Asuka moved in Kaji's place, leaving Misato all alone. Shinji worries about and thinks that Makoto is doing his job because of the welfare of NERV employees, Makoto corrects him, saying he is doing this because of his love towards Misato, sharing his secret with Mana and Shinji, making it clear that he is helping them but with further selfish intentions.

Later, they encounter Asuka who is acting like a parody of a japanese housewife, wearing an apron, braids and using wooden clogs. She wishes happiness to Kirishima and Shinji aks her if she plans to pilot the EVA, and she says that if there is a need, she will pilot it again, dashing leaving the couple alone.

The last scene is with Mana and Shinji waiting for the train near the ocean holding hands with their bags. Shinji tells her that it almost feels like everyone is moving away from him, Mana asks him if she is lonely, and he thinks it is a bit, but that is the path that he chose. She says that the world that he should live is different from her, and he says that they are going to live together from now on and she agrees. Shinji says lets live together, Mana smiles and says thank you. 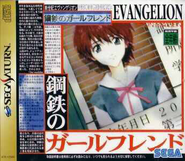 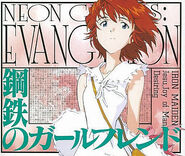 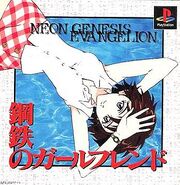 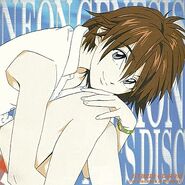 The PlayStation Portable version of the game sold 4,603 copies the week of its release.[2]