This article contains content from the EvaGeeks.org Wiki article Evangelion Anima. Please view that page's revision history for the list of authors.

Neon Genesis Evangelion: ANIMA (エヴァンゲリオン ANIMA) (Previously known Neon Genesis EVANGELION (3 Years After) -ANIMA- and shortened as Evangelion ANIMA) is a light novel that was serialized in Dengeki Hobby Magazine from 2008-2013.[1] It is set in an alternate future of the Evangelion world in which the Human Instrumentality Project, seen in episodes 25 and 26 of the anime was averted by Shinji(along with some plot changes such as Kaji not getting shot or Unit-00 being not completely destroyed).

The initial announcement was presented in the November 2007 issue, with a short introduction by and interview with Ikuto Yamashita in December 2007. The first chapter was published in the January 2008 issue. The chapters are accompanied by numerous illustrations of the characters and many redesigned and upgraded Evas. On a side note, those designs use a lot of scrapped ideas from Neon Genesis Evangelion Proposal as well as "foreshadow" the Evangelion designs used for the Rebuild of Evangelion tetralogy.

ANIMA is advertised as "Ikuto Yamashita presents," and he is credited as the supervisor of the entire work, mecha designer, and illustrator. Character design and character illustrations are done by Hiroyuki Utatane, with coloring by Ryou Ramiya. The series also features additional mechanical designs by Seiji Kio and, in a few issues, models built by some of the Dengeki Hobby modelers as well as Bandai prototypes. The Chōgōkin Super Evangelion toy was finally released in March 2010 after more than 2 years of development by Bandai and supervision by Yamashita.

On January 11, 2019, Seven Seas Entertainment announced they had licensed ANIMA for an English language release. The first volume of the series was released early digitally on August 15, 2019 and in print on October 29, 2019.[7][8] Three out of five of the novels have been released so far. Volume 4 is planned for print release on November 24, 2020, with the final volume planned for print release on June 29, 2021. As of August 25, 2020, no early digital release dates have been announced for the final two volumes.[9]

What if reluctant hero Shinji Ikari had saved the world? Now, at seventeen years old, he is the defacto leader of the EVA team. Under the leadership of Commander Misato Katsuragi, the Evangelion suits have been updated with advanced designs and powers, in preparation for the possible return of the monstrous Angels. Four copies of Rei Ayanami have been tasked with operating a global anti-Angel search-and-destroy program. But when one of these clones goes rogue, it’s up to Shinji to stop her. (Official description from Seven Seas Entertainment)[8].

Tensions run high as the black giant Armaros looms threateningly over planet Earth, armed with the mighty Spear of Longinus. The pilots race to avert disaster, but Rei Quatre throws a wrench in their plans by kidnapping Misato! Meanwhile, Shinji is confronted by a strange white Evangelion that looks just like Eva-02, piloted by a familiar face. Can Shinji and his comrades save the world yet again, or are the forces arrayed against them just too strong this time? (Official description from Seven Seas Entertainment)[10]

Severely wounded in battle with Armaros, Shinji struggles to shoulder the responsibility of being Earth’s savior yet again. Meanwhile, Asuka adjusts to her strange new body, and the clones Trois and Quatre continue their quest for their own identities. But their enemy wields the power of a god, and it’s going to take every single one of them working together to prevent a reprise of the Human Instrumentality Project. (Official description from Seven Seas Entertainment)[11]

A chunk of the growing moon breaks off and hurtles toward Earth, spelling immediate doom for the planet even as the Lance of Longinus continues to suck it dry. Shinji moves to destroy the deadly asteroid before it can make contact, but is felled by a horrifying, unforeseen force. Can he be resurrected once more before it’s too late? Or are Earth’s defenders finally out of miracles? (Official description from Seven Seas Entertainment)[12]

The moon continues its expansion to become the next stage of the Human Instrumentality Project. Due to the Third Impact caused by Shinji and the Super Evangelion, Yomotsu Hirasaka lands in the waters near Japan in the Pacific Ocean, becoming a new island.

Although the earth is declining due to the tightening of the Longinus Ring, people find hope in the fact that the Black Giant, Almaros was defeated. However, no one realized yet that "the giant that defeats Almaros becomes the next Almaros" and that both EURO II Heurtebize and pilot Hikari have been taken in by it.

Shinji, who was frozen in time just before Third Impact and only barely exists in the newly-emerged final Eva, Rei Ayanami and her clones who are beginning to come to terms with their budding egos, and Asuka, who is seeing things beyond the borders of humanity dissolved in the Eva... they are...

How will they deal with an event coming from the new island of Yomotsu Hirasaka that will bring about the end of the world? And will they be able to escape the intense and ruthless cycle of humanity's failed Instrumentality Project? (Gist translation of Japanese synopsis) 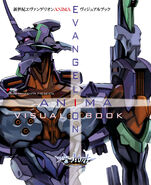 Second logo
Add a photo to this gallery

Retrieved from "https://evangelion.fandom.com/wiki/Neon_Genesis_Evangelion:_ANIMA?oldid=47339"
Community content is available under CC-BY-SA unless otherwise noted.