NERV (German for "nerve") is a special organization that was put together to combat the Angels after the Second Impact and is the organization responsible for the creation of the Evangelions.

NERV has several missions. First of all, it aims to put in place the Human Instrumentality Project , under the supervision of the high escalon of SEELE. But the public purpose of NERV is to defend humanity against the Angels to prevent them from initiating the Third Impact after the destruction carried out during the Second Impact. For this, the organization has developed and uses the Evangelions. In reality, the destruction of the Angels is one of the stages for the implementation of the Human Instrumentality Project.

Officially, the NERV is a private organization under the direct supervision of the United Nations, with limited authority by the local administration and, to some extent, over the military forces of the United Nations. However, NERV is primarily independent from the United Nations, except for funding. Due to the inability of conventional forces to fight the Angels, combat strategies are often left to the discretion of the highest levels of NERV without any external interference. NERV is able to keep its own positions if it feels necessary.

NERV employs several thousand people, including scientists, technicians, paramilitary security forces, and support personnel. The standard uniform for NERV employees is a khaki uniform with triangular patterns on the shoulders. People in a position of command (Gendo Ikari, Kozo Fuyutsuki, and even Ryoji Kaji) wears other type of clothes. All NERV employees have a triangular clip on their left breast to indicate their rank.

In the absence of the Commander and Vice-Commander, control of NERV HQ falls to Misato Katsuragi. She and Ritsuko Akagi seem to have more or less an equivalent position in the NERV hierarchy. The exact relationship between the two is a bit unclear. At several times, they give each other orders but it seems that Misato commands Ritsuko on the tactical level, in particular on the use of Evangelions, while Ritsuko commands Misato when it comes to technical level, especially when it comes to damage to the units.

In the Rebuild of Evangelion series NERV is depicted as similar as in TV Series. It's an organization under nominal control of the UN, but beholden to the whims of SEELE to a degree. Aside from NERV HQ beneath Tokyo-3, NERV also maintains Bethany Base in the Arctic and Tabgha Base on the Moon, though SEELE restricts access to the latter. NERV is bound by the Vatican City Treaty, which restricts the number of operational Evangelions a single country can control at any one time. The personnel is mostly the same with a notable major difference being the Geofront Security operates on the surface level and are more heavily armed with MP7A1s modified with extensions and wear a ballistic vest with neck cover and their iconic red beret.

14 years after the Near Third Impact, NERV is mostly in ruins and has lost almost all of its staff, many of whom formed WILLE with the remnants of the survivors of the Near Third Impact to prevent NERV from instigating another Impact. NERV also uses a different logo. Only Gendo and Fuyutsuki remain to oversee NERV's operations. Automated facilities beneath the ruins produce new Evangelion units, such as the Nemesis Series, Evangelion Mark.09, and Evangelion 13. NERV deploys its Evas against WILLE in order to recover Shinji and initiate Fourth Impact.

Despite all the components required for the fifth and additional impact being completed, with WILLE still controlling the final Shikinami clone, the AAA Wunder and Unit-01 their goal could not be achieved, they needed WILLE to attempt their final assault to bring all the components of their plan together. Knowing WILLE would try to prevent any action taken, all NERV needed to do was head to the location where the fifth impact would take place and wait. The location chosen to undertake their plans was the south pole, the location of the second impact. With the warships launched and the Evangelion deployed, NERV HQ began its slow crawl to the south pole.

After arriving, as expected WILLE began their attack by launching New Evangelion Unit-02α and Evangelion Unit-08y. Using the seemingly endless army of Mark.07, NERV was successful in slowing down the descent of the units before separating them upon their descent with the Arm Units. With Unit-08 staying back to hold off the arms, Unit-02 headed to deactivate Evangelion 13 using the Shutdown Override Signal Plug. As NERV planned, the unit would be unable to use the plug forcing its pilot, the final Shikinami clone to unleash the ninth angel held within her dissolving into the plug in the process. Capitalizing on this opportunity, Evangelion 13 reawakened, destroying the angelic Unit-02 and consuming the Shikinami clone leaving only two more things left for NERV to take control of.

Paragraph about AAA Wunder and Unit-01

The Technical Division, headed by Ritsuko Akagi corresponds to the scientific branch of NERV, responsible for research and development of Evangelions, as well as maintenance and development. She also carries out scientific analyzes about the Angels to try to better understand them and help the Operation Tactical branch in their fight.

Each NERV facility accommodates a large number of mechanics, electricians and other personnel dedicated to maintenance, repair and construction. The standard uniform consists of an orange jumpsuit and a hat. Personnel involved in Evangelion research, development and testing wear the standard khaki NERV uniform. Doctor Akagi wears a white lab coat instead of a uniform.

The NERV Intelligence and Security Department is a division of NERV that includes intelligence and counterintelligence activities. They are also special agents tasked with tracking Evangelion pilots and investigating security breaches. They manage to recover from Shinji Ikari after his escape two days earlier.

NERV has its own public relations department, which manages propaganda and media censorship to control information about Angels and Evangelions to the general public. For example, after the fight against the Fourth Angel, the official information released indicates that no one was injured in the fight between Evangelion Unit-01 and the Angel, when in reality Sakura Suzuhara was mentioned to be injured.

NERV Headquarters is the main base of NERV. It is located in the GeoFront below Tokyo-3 . This is where the original version of the Magi supercomputer is located as well as the most number of Evangelions.

The 1st Division, or NERV-01, is located in Massachusetts, United States. This is where the Evangelion Unit-03 was built. Magi 04 is probably located at or near NERV 01 (possibly at the MIT campus).

The 2nd Division, or NERV-02, is located in Nevada, United States. This is where Evangelion Unit-04 was built. During a test for the installation of an experimental engine, the entire 2nd Branch base mysteriously disappeared, with its thousands of employees and everything around it. center within a radius of 89 kilometers. The exact cause of the disappearance is unknown, but it wasn't just a simple explosion, most likely related to the test.

The 3rd Branch, or NERV-03, is affiliated with Euro-NERV and is located in Germany, possibly Berlin or Hamburg. This is where the Evangelion Unit-02 was built. Asuka Shikinami Langley apparently underwent NERV-03 training with Unit-02. Asuka and Unit-02 were transferred to NERV Headquarters in Japan in 2015. The Supreme Commander is General James Henderson.

Bethany Base is located between Europe and Russia. This is where the Evangelion Provisional Unit-05 was stationed and the Third Angel was researched.

The 7th Division is located on the Moon. The Evangelion Mark.06 is designed on the terrestrial satellite at Tabgha Base. This is also where Kaworu Nagisa is located before he arrives on Earth. It seems that this base is very largely under the control of the SEELE. When Gendo Ikari and Kozo Fuyutsuki came in for an inspection, their shuttle was not allowed to land but would only fly over the scenery.

The Matsushiro Secondary Experiment Facility is a second research center located in Matsushiro near Tokyo-2. It has an independent technical team and research support for at least one Evangelion. The first activation test of Evangelion Unit-03 takes place at Matsushiro base. But the discovery of the Ninth Angel and the explosion it causes, destroys part of the research center.

See Evangelion Weapons for a complete list and specific details

See Evangelion Equipment for a complete list and specific details

NERV logo ruined as a result of the NERV civil war 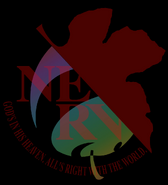