This article has a collection of images to further represent its content. To see its gallery, visit NERV-made Anti-G Weapon/Gallery. 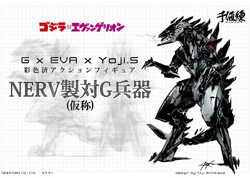 The NERV-made Anti-G Weapon (NERV製対G兵器[?]) is a weapon designed by NERV's Anti-Godzilla Division to counter the Kaiju in the Godzilla x Evangelion crossover series. It was designed in the real world by Yoji Shinkawa, of Metal Gear and Zone of the Enders fame.

Its purpose is to fight against "Godzilla", the monster which attacked and destroyed Japan's capital Tokyo countless times and is considered as “disaster" just as the "Angels" are. This is an "Anti-G Weapon" which NERV constructed with technical data feedback from the "Kiryu Series" developed by the Japan Self Defense Force in the past.

It is at its prototype stage, and is given the name "Anti-G Special Decisive Weapon – Shiryu (Purple Dragon) Prototype Unit 01."

Among its armaments are small blades on its spine and tail utilizing the same technology as the Progressive Knife, which can sever various objects at a molecular level using high vibration particles.

Also, it boasts a high close-combat capability with the "Anti Kaiju Battle Blades" attached to its arms.

Retrieved from "https://evangelion.fandom.com/wiki/NERV-made_Anti-G_Weapon?oldid=32630"
Community content is available under CC-BY-SA unless otherwise noted.