This article contains content from the EvaGeeks.org Wiki article Matarael. Please view that page's revision history for the list of authors.
This article largely borrows its content from another wiki, such as Wikipedia or EvaGeeks. Substantial cleanup and reformatting may be needed.

This article has a collection of images to further represent its content. To see its gallery, visit Matarael/Gallery.

The Angel of Rain

Matarael (マトリエル[?]) (Hebrew: מטראל) is the 9th Angel, which attacks when Tokyo-3 is in the middle of a power blackout. 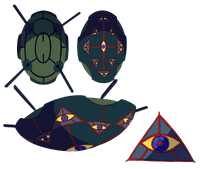 Matarael is a gigantic opilinoid-like entity, with four immensely large legs (which are taller than most skyscrapers) and a relatively small body core. The many "eyes" on Matarael's central body are not actual eyes, but a camouflage pattern using mimicry to confuse its enemies, although the central eye appears to be real and functional. The Angel secretes orange-colored corrosive acid from its central "eye", which can burn through anything.

Matarael does not have a visible core; it appears to be hidden internally, as per Ramiel and Sandalphon.

With Tokyo-3's electrical power sabotaged by an unknown human party, NERV was incapable of detecting Matarael's landfall or receiving any information about it, thus giving it no opposition from Evangelions or surface defenses. Matarael moved into a position above the Geofront and began to secrete corrosive acid from its central eye to breach the armor below.

NERV eventually learned of the Angel's presence and launched the Evangelions manually, fitted with extra battery packs. The Evangelions climbed through access shafts, reaching an access shaft directly under the Angel's position. Splashed with corrosive acid, the Evas dropped their weapons and fell down the shaft.

Asuka Langley Sohryu took charge and devised a battle plan in which Unit-02 would neutralize the Angel's A.T. Field and protect the Evas below from the acid, while Unit-00 would jump to the bottom of the shaft, retrieve the pallet rifle, and pass it on to Unit-01. Unit-02 would move out of the way while Unit-01 fired directly upwards at the Angel. The plan was executed perfectly, and Matarael was killed in a prolonged burst of rifle fire.