The cross (十字架, juujika) is a symbolic religious reference frequently used in Neon Genesis Evangelion, though often particularly loosely. Many of the uses of crosses in the series don't actually have a particularly higher meaning or correlation to narrative events, beyond simply that someone is "sacrificed", etc. Also, many times things such as cross-shaped energy explosions are used, but these instances in particular don't really seem to have a higher meaning.

The creators themselves admitted using the emblems of Christianity simply because they "looked cool," according to Evangelion Assistant Director Kazuya Tsurumaki, who at the Otakon 2001 anime convention said:

"There are a lot of giant robot shows in Japan, and we did want our story to have a religious theme to help distinguish us. Because Christianity is an uncommon religion in Japan we thought it would be mysterious. None of the staff who worked on Eva are Christians. There is no actual Christian meaning to the show, we just thought the visual symbols of Christianity look cool. If we had known the show would get distributed in the US and Europe we might have rethought that choice."

There are 5 types of crosses used in Evangelion. They are the crux immissa (Latin cross), inverted crux immissa, Greek cross, Cross of Tau, and Cross of Lorraine.

White cross over the logo of the original series

Sachiel's death creates a cross of light in the original series

Deep Underground Facility in Central Dogma in the original series

Lilith crucified upon tau cross in the original series 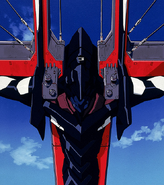 Failed Evangelions in cross of Lorraine in the original series 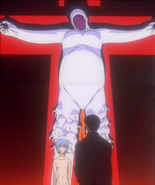 Lilith before Rei enters her in The End of Evangelion

Rei/Lilith confronts crucified Unit-01 in The End of Evangelion

Tree of Life cross-shaped in The End of Evangelion

The Fourth Angel's death cross in Rebuild of Evangelion

The Sixth Angel in its Cross form in Rebuild of Evangelion

The Sixth Angel's beam makes a crossroads in Rebuild of Evangelion

The Seventh Angel's explosion and battle aftermath in Rebuild of Evangelion

Misato's Father gives her cross pendant in Rebuild of Evangelion

Unit-04's disappearance with cross in Rebuild of Evangelion

Destrudo describes a psychic energy that arises from the Death Drive (Thanatos). It is basically the mechanism that is involved in the destruction of a living being, essentially returning that living being back to "nothing" in extreme cases. It is implied that the effects of destrudo manifest in a living being's A.T. Field. The term is loosely taken from Freudian Psychology and is an opposing energy to Libido as seen in the Psychographs of Episode 20.

During Episode 12 Gendo Ikari states that "science is the power of man," possibly suggesting that the Fruit of Knowledge is man's ability to cogitate, using his knowledge of the universe to build the Evangelions, which Kozo Fuyutsuki says mankind was destined to build during The End of Evangelion. This may mean that the Fruit of Knowledge is in truth, the Lillin's brain.

God (神, kami) is a term in the NGE universe, used excessively broadly and often to mean more than one thing. It's hard to define, as well, since kami is both a concept unique to Shintoism and the Japanese translation of the Western term "G/god", which is something wildly different.

It also shows up in the Classified Information a number of times. Its usages can be noted here, as well.

Glyphs also known as Angel-sealing Hex Glyphs (使徒封印用呪詛文様, shito fuuin'you mon'yoo) in the Evangelion 2.0 Complete Records Collection, are mysterious symbols which appear in various scenes of the later movies of Rebuild of Evangelion; the meaning of them is unknown. These symbols are the same as the ones in the red Noah from the Anime Fushigi no Umi no Nadia.

- On the floor of Bethany Base Control Room

- On Rei 's LCL tank in the Underground Facility

- In Asuka 's eyepatch whenever her eye glows

- In the new logo of NERV

- In Eva-13 's interface graphics when the seal of the central dogma is broken.

- On the collar of Kaworu's plugsuit as the Fourth Impact begins.

Libido describes a psychic energy that arises from the Life Drive (Eros). It is basically the mechanism that is involved in the creation of a living being, essentially forming a living being out of "nothing" in extreme cases. It is implied that the effects of libido manifest in a living being's A.T. Field. The term is loosely taken from Freudian Psychology and is an opposing energy to Destrudo as seen in the Psychographs of Episode 20.

A Rainbow (虹, niji), is an optical and meteorological phenomenon that appears in the Rebuild film series, briefly after the death of an Angel.

According to Genesis, after Noah's flood God put the rainbow in the sky as the sign of His promise that He would never again destroy the earth with flood (Genesis 9:13–17) (Holy Bible: (King James Version.) (2004). Intellectual Reserve, inc.)

The Church of Jesus Christ of Latter-Day Saints founder and prophet Joseph Smith stated that the second coming of the Christ would not occur in any year in which a rainbow is seen ("I have asked of the Lord concerning His coming; and while asking the Lord, He gave a sign and said, "In the days of Noah I set a bow in the heavens as a sign and token that in any year that the bow should be seen the Lord would not come; but there should be seed time and harvest during that year: but whenever you see the bow withdrawn, it shall be a token that there shall be famine, pestilence, and great distress among the nations, and that the coming of the Messiah is not far distant." Teachings of the Prophet Joseph Smith, Section Six 1843-44, p.340)

The Eighth Angel's multiple round rainbows

The Twelfth Angel's rainbow
Add a photo to this gallery

Rainbows also appeared in some scenes in the TV anime.

Retrieved from "https://evangelion.fandom.com/wiki/List_of_religious_and_philosophical_terms_in_Evangelion?oldid=39699"
Community content is available under CC-BY-SA unless otherwise noted.