This article contains content from the EvaGeeks.org Wiki article Lilith. Please view that page's revision history for the list of authors.
This article largely borrows it content from another wiki, such as Wikipedia or EvaGeeks. Substantial cleanup and reformatting may be needed.

This article has a collection of images to further represent its content. To see its gallery, visit Lilith/Gallery. 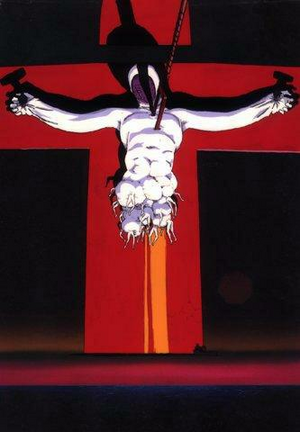 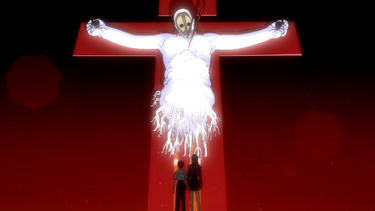 Lies and Silence[NGE]
Stage 32: The Abyss of Truth[Manga]
Evangelion 1.0[RB]

Lilith (リリス Hebrew: נדה ,לילית xxiv folio b) is designated as the Second Angel. Like Adam, Lilith is a Seed of Life, created by the First Ancestral Race billions of years ago. Thus, Lilith is actually a co-equal being to Adam. The other Angels are the progeny of Adam, but Lilith is the progenitor of the "Lilin": humans.

Billions of years ago, Lilith's "Black Moon" transport vessel collided violently with Earth, purely by accident, in the event known as "First Impact", creating Earth's Moon. Lilith's own Spear of Longinus is presumed to be destroyed in the crash. Earth already had a Seed of Life present on it, Adam, but no two Seeds are meant to land on the same planet. However, because Lilith's Spear of Longinus was destroyed, the only remaining Spear on the planet - Adam's - activated to try to fix the situation, and reduced Adam to a state of dormancy. Lilith then spread the primordial ooze from which "normal" terrestrial life on Earth evolved over the course of billions of years (bacteria, dolphins, monkeys, etc.), which culminated in the human race. Thus Lilith's progeny, humanity, usurped the place of Adam's progeny, the Angels, as the dominant race on Earth.

For countless ages, the Black Moon containing Lilith was embedded deep within the Earth, and due to shifting tectonic plates, the subterranean Black Moon eventually moved to a position underneath what would become known as Hakone, Japan, forming the massive, underground cavern that would be termed the "GeoFront".

At some undetermined point in the recent past (possibly even before Second Impact) the Black Moon and Lilith were discovered by SEELE. Gehirn (later, NERV) headquarters and Tokyo-3 were built around its position. Lilith was kept crucified to a giant cross in the deepest and most secret level of NERV HQ, Terminal Dogma, and used as a renewable source of LCL for the Evangelion Units (LCL in fact being Lilith's blood). SEELE and NERV used Lilith for various experiments, then intentionally let Lilith grow to a point just before it could be used to initiate Instrumentality (for the sake of convenience), but then halted its growth by impaling it on the recovered Spear of Longinus which had been paired with Adam. Thus, Lilith would be ready to use in initiating Third Impact as soon as the other components needed for the process were in place.

The Evangelion Units were created by making clones of Adam, with the sole exception of Evangelion Unit-01. Unit-01 is the only clone of Lilith (hence, it is the "Test-Type"). Still images in Episode 23 suggest that instead of merely taking genetic samples from Lilith, Evangelion Unit-01 was created by physically tearing away from the lower half of Lilith, forming itself from the body mass of Lilith's legs (explaining its legs' conspicuous absence) and tearing away from Lilith trailing tattered ropes of flesh, in a mockery of the natural birth process.

In The End of Evangelion, Gendo forces his hand into Rei III, merging the Adam embryo in his right hand with her in an attempt to control Lilith and reunite with Yui. However, Rei rejects Gendo and with Adam's body and soul within her, she proceeds to merge with Lilith's body in Terminal Dogma. The blobs of humanoid legs are sucked in and disappear when Rei enters Lilith's body. The gestalt Rei/Adam/Lilith being then initiates Third Impact and Instrumentality. However, Shinji Ikari ultimately chooses to reject instrumentality, and Unit-01 burst from the being's eye and breaks the Spear of Longinus in two. The Rei/Adam/Lilith being then falls to Earth in pieces, presumably dead.

While there is no official name for this being, it is commonly referred to in the fan community as "Giant Naked Rei" or GNR. However, it's also common to consider this being primarily Lilith. Since Rei was essentially Lilith itself, and Adam (as Kaworu) only appears briefly, it seems that Lilith has primary control over the being.

Adam may have had primary control over the Kaworu body, and perhaps Adam was using Shinji as a weapon to reinstate his reign over Earth, however this had not gone to Adam's plan after Shinji learned the loneliness of Instrumentality and brought everybody back, Adam too died with Rei and Lilith.

Lilith appears to be a vaguely-formed roughly Evangelion-sized humanoid upper torso with blubbery white flesh, of non-distinct gender. Lilith has no legs or hips when it is seen in the year 2015, its torso terminating in blobby masses with dozens of humanoid-sized pairs of legs growing out of them. Lilith is kept restrained in Terminal Dogma, crucified onto a giant red cross: large nails are driven through its palms into the cross from which it hangs. Lilith has five fingers on each hand (just like a human). Lilith remains totally immobile and unreactive, simply hanging limp on the cross it's nailed to and unresponsive to events around it. Lilith's lower torso seemed to have the odd blobs with human-sized legs while impaled as rivaled to the blubber that grew into her torso after the Spear was removed and she could grow again.

The Spear of Longinus was impaled through Lilith's chest while it was restrained on the cross in Terminal Dogma, but after Eva Unit-00 removed the Lance in Episode 23, Lilith's lower-legs grew back (though its new legs still had dozens of pairs of humanoid legs growing out of them, from the region of its thighs). LCL is actually Lilith's blood, a steady stream of it pouring down the cross, and it is the true source of the LCL used in Evangelion Entry Plugs. Indeed, the "LCL Production Plant" is really just a large artificial lake of LCL formed by it pooling on the level beneath Lilith's red cross. The LCL apparently flows out of the exit wound formed by the Spear of Longinus in Lilith's back (as there is no LCL flowing out of the front of its torso) though NERV has been collecting LCL from Lilith since long before the Spear was recovered in 2015 (in Episode 12). Several production sketches reveal that there are actually tubes coming out of the back of Lilith's head, labeled "LCL tube A" etc., which may be another means of extracting it.

Perhaps Lilith's most distinctive feature is the purple mask which covers its face. Lilith has seven eyes arranged in two vertical rows on its face, three on the right and four on the left, and the mask contains holes for each of the eyes. It is unknown if the eyes behind the mask are Lilith's actual eyes or rather a part of the mask. The eyes likely disappeared when Lilith began to transform into Rei. Etched onto the mask is a pointed-downwards triangle which intersects all of the eyes (except for the lowest eye on the left). It is not entirely clear if the mask is a natural part of Lilith (some form of bone-plate), or if it is another artificial restraint placed onto it. The symbol of the mysterious SEELE organization is the face of Lilith. Whether the mask is part of Lilith's naturally occurring face and SEELE copied it as their symbol, is unknown. The purple mask is roughly oval shaped, and is somewhat dinged and dented.

Lilith's marshmallow-like, white flesh forms several blubbery folds around its head (leading to the appearance of almost having two double chins). Lilith also has two ill-defined lumpy and uneven blobs on the sides of its head which are apparently its ears. Lilith's back, visible only when it descends from its cross moments before it physically begins to manifest as Rei (which it had merged with), appears to be very bumpy where vertebrae form large blubbery lumps in a line running down its back. Surprisingly, no LCL is flowing from an exit wound on Lilith's back. Also oddly, Lilith's palms float off the nails like putty.

In Jewish folklore, Lilith was Adam's first wife, created at the same time. In some tales, she bore him 100 children per day. However, she was headstrong and refused to be subservient to her husband, so God cast her out of the Garden of Eden and created Eve from one of Adam's ribs.

Lilith's role in the manga is identical to her role in the anime, right down to Gendo attempting to use her and Adam in his attempts to control Instrumentality. When Shinji rejects Instrumentality, she (and Rei Ayanami, by extension) disappears, leaving her fate unknown.

Lilith appears again in Rebuild of Evangelion, although the time and circumstances of its appearance onscreen are vastly different. While Lilith is seen in the series at the beginning of the descent arc (The end of Episode 15), Lilith is seen roughly three-fourths of the way through Rebuild of Evangelion 1.0. Instead of Kaji revealing Lilith to Misato, Misato herself shows Lilith to Shinji in order to explain the urgency of fighting the Sixth Angel, and correctly identifies Lilith as such. Dialogue between Gendo and Fuyutsuki reveals that a "contract" has been established between SEELE and Lilith that involves the destruction of all the Angels, for purposes involving the Human Instrumentality Project. When Kaworu is observing the Earth from the Moon, a being similar to the original Lilith is laying in a square hole in front of him.

Lilith is seen during the abortive Third Impact at the end of Evangelion 2.0, with what appears to be a faint glow and small white sparks floating off her body. Keel Lorenz, in an earlier conversation with Gendo, speaks about "resurrecting" Lilith. It is possible that Lilith was in some way affected by the events surrounding Unit-01 at the end of Evangelion 2.0, though to what extent is at present unknown.

Lilith's design in Rebuild had undergone an overhaul as well. No longer does Lilith have its trademark seven-eyed mask, but instead has an ossified mask or face-plate similar to the face Sachiel grows after the N2 mine attack, with two eyeholes and a small beak protruding out of the lower end of the mask.

The Spear of Longinus is already impaled through its chest and the large bolts driven through its palms and into the cross remain. However, Lilith's chest bears a large scar across it, one that resembles the scar seen on Misato's chest in the TV series in both location and appearance. In addition, a series of small cross-shaped objects are driven into its chest. Lilith's cluster of legs now twitch and sway, and it continues to trickle LCL into the lake below.

In Evangelion 3.0: You Can (Not) Redo Lilith's body is now in the midst of a pit filled with giant skulls, decomposing and in crawling position. It is pierced by two Spear of Longinus and beheaded (its head being replaced by Evangelion Mark.06). Its head, for its part, is in the former NERV Command Center, where it transformed into ​​the face of Rei Ayanami. When Shinji withdrew the two spears from Evangelion 13 to prevent the Fourth Impact, her whole body reverted to LCL, including the head present in the Command Center.

Retrieved from "https://evangelion.fandom.com/wiki/Lilith?oldid=40342"
Community content is available under CC-BY-SA unless otherwise noted.