This article largely borrows its content from another wiki, such as Wikipedia or EvaGeeks. Substantial cleanup and reformatting may be needed.
This article contains content from the EvaGeeks.org Wiki article Kyoko Zeppelin Soryu. Please view that page's revision history for the list of authors.

Kyoko Zeppelin Sohryu (惣流・キョウコ・ツェッペリン[?], "Sōryū Kyōko Tsepperin")is a fictional character from the Neon Genesis Evangelion franchise. She is Asuka's mother, was a key scientist in the German division of Gehirn (what would later become NERV's Third Branch) and the development of Unit-02, the first Production Type (the second and third of which were later produced by the two American branches of NERV). She was the subject of the Contact Experiment with Unit-02, but during the experiment her soul bonded with the EVA, causing severe mental damage to Kyoko. She became mentally unstable, believing that one of Asuka's dolls was her daughter rather than Asuka.[1] She was admitted to a mental institution shortly after the experiment. Her husband entered an affair with Kyoko's own doctor, which eventually prompted Kyoko's suicide in 2005.

In the manga, Kyoko and her husband Mr. Langley were unable to conceive a child, and divorced after he had an affair. He re-married and had a daughter, while Kyoko visited a sperm bank and was impregnated. She tried to poison Asuka against her ex-husband's daughter, referring to her as "that girl," but after the contact experiment this dissociation was transferred to Asuka's doll. At one point, Kyoko tried to strangle Asuka.[2]

One of the dolls that Kyoko was carrying was decapitated; Asuka acquired the head and carried it with her as she watched her mother through the hospital glass. Kyoko throttled another, and, ultimately, used it to commit a "double suicide", hanging both herself and the doll-Asuka — a spectacle the real Asuka had the misfortune of seeing.

While Kyoko was confined at the hospital, her husband began to carry out an affair with her doctor. Little discretion was taken from the start, as the two engaged in sexual acts in the room adjacent to Kyoko's; and, by the time of the funeral, they were already married. Individuals attending Kyoko's funeral provided insinuations that Langley's infidelity was the ultimate driving force behind the suicide itself.

Although Kyoko physically died, the maternal component of her soul, at the very least, continues to survive within Unit-02. Evidence suggests that the remainder was salvaged into Unit-02 following the suicide, as well: In flashbacks to Episode 22 and Episode 25, we hear the insane Kyoko begging Asuka, "Please die with me!"

Also, in the Episode 25' scene where Asuka finds her mother within Unit-02, Kyoko repeats, "You mustn't die! You must live! You're alive!", several times. However, the familiar "Please die with me!" is mixed in twice among her inspirational words, thus suggesting that the insane Kyoko and the maternal Kyoko were incorporated together.

Asuka only learns that "[Mama] was always watching over" her and "protecting" her shortly before the two of them do at last die together: Kyoko, as Unit-02, is ravaged and killed by the Mass Production Evangelions, taking Asuka with her.

Kyoko in Other Media

In Sadamoto's manga, Kyoko is seen more clearly in Asuka's Arael-induced flashbacks, although her design is completely different from that in the anime.

Kyoko conceived Asuka with donor sperm after her husband had an affair and left her for not being able to conceive. Kyoko's former husband had a child by the woman he had an affair with. Kyoko pushed Asuka to be better than 'that other woman's child'. During her hospitalization for mental illness, Asuka was able to gain access to her, and Kyoko throttled her, an event Asuka later reenacts with Shinji.

Kyoko also appears in the Shinji Ikari Raising Project spin-off manga, where she shares her design with Sadamoto's manga. Here, she is characterized as somewhat clumsy, and easily falls asleep (such as when she sleeps through an evacuation order). She also embarrasses Asuka frequently by imagining Asuka and Shinji married someday.

She's also mentioned in Neon Genesis Evangelion: Angelic Days, as well as Mr. Langley. It's implied they're both alive and well, have good relationships with their daughter, and probably are still married in that continuity. 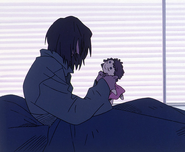 Asuka becomes aware of her mother's residence in Unit-02

Kyoko's soul has been inside both Evangelion Unit-02 Type II Allegorica and Evangelion EURO-II Heurtebise, since it used parts of it as testbed for the development of the Heurtebise unit. Unlike the TV series, she is shown to be alive, living in a small hamlet near the Rhine.[1]

Asuka Langley Sohryu in her Torwart A1 form and Hikari Horaki visited the place where Kyoko lives in order to see her.

Kyoko was asleep in her bed. Her situation is that she is being held in one of the Europe's Evangelion Research facility that also held the failed Evangelion candidates, those who weren't chosen by Heurtebise would live there until their death under strict observation. Alongside those failed pilots, other individuals who possed highly sensitive information would be kept there too.

Kyoko's is described as a pale woman with sunken cheeks. Her brain fluctuations were active a few hours previously the visit by Asuka and Hikari. She is equipped with implants that creates a calming enviroment, her body rejects drugs after being exposed for such a long time, now being only able to be maintained through nanomachines with an exterior electromagnetic network attached to her bed. [2]

The two Torwarts appear in Europe, after the battle of Novaya Zemlya fully healed. Torwart B stayed still without moving. Torwart A walked into the village, as it walked, the damage of its steps and the back plate caused much destruction to the small village.

As Heurtebise was being repaired, Hikari visited the small village with a bouquet of flowers in her hands. Upon the danger of the Torwart, the NERV Germany security team wanted to extract her from the situation, but Hikari refused leaving, saying that she believes that the giant wants to see her too.

Hikari asked their defense force to not attack Asuka, and their fighter planes kept flying above the vilage. Hikari upon talking with the doctors, took her smartbed into the hospital's elevator and pressed the button to the roof. There, she talks with Kyoko, saying that Asuka came with her to meet you. Hikari thought how ironic it was that the counscious in Heurtebise asked Hikari to take care of Asuka in North Africa and the same conscience protected her daughter in the Moon from being absorved by the Ark, forming the Asuka/Evangelion synthesis.

Hikari ponders if meeting her mother as a being so small in her vision inside an Evangelion has this feeling, saying that she felt the same thing when she saw Toji inside the N² Flanker, even more when you are used to see they loom over you.

Asuka extended her arm straight and hovered her fingers over the bed. Hikari apologized for screaming at her about Toji, telling her that she knew she was trying to save him. As she said that, she noticed that Kyoko was now smiling.

Not long after that, Asuka's body turned into the north and started walking in that direction, not only Asuka, but Torwart B too, like it was being called over by something. [3]