This article contains content from the EvaGeeks.org Wiki article Keel Lorenz. Please view that page's revision history for the list of authors.
This article largely borrows its content from another wiki, such as Wikipedia or EvaGeeks. Substantial cleanup and reformatting may be needed.
There exists much information that should be added to this article. You can help by expanding it.

Chairman Keel Lorenz (キール・ローレンツ[?]) is a fictional character from the Neon Genesis Evangelion franchise. He is the enigmatic leader of the mysterious SEELE organization.

Little is known of the SEELE organization, and even less is known about its leader, Chairman Keel, who also serves as the head of the Human Instrumentality Committee, the five-man subgroup of SEELE which directly oversees NERV's Evangelion project (as well as their secret Human Instrumentality Project), and functions by working through the UN, secretly pulling the strings of world governments.

What is known for certain is that Keel was active within SEELE's machinations before Second Impact, and was involved along with Gendo in the United Nations' cover-up of the true nature of the disaster involving Adam and the Katsuragi Expedition. Through SEELE, Keel secretly backed Gehirn and later its successor organization, NERV in their creation of the Evangelion project.

At some point between Second Impact and 2015, most of Keel's body, below the neck, was replaced with cybernetic implants. Although he uses a visor to see, Keel still possesses eyes (as indicated by production drawings). When the organic components of his body became LCL, the remaining mechanical components were left behind, and appear to include most of his spinal column.

Sadamoto's manga depicts SEELE as having been around for centuries.

Keel does not physically appear in the Rebuild continuity, but is represented as a monolith in Evangelion 1.0; it is not until Evangelion 2.0 that he is credited by name.

Keel's monolith appears in Evangelion 3.0: You Can (Not) Redo, being silent during his first appearance. As the Monoliths are turned off one by one by Fuyutsuki, while Gendo thanks SEELE for their guidance of humanity. Keel accepts his death with dignity, saying that their wish will be fulfilled. He prays for the peaceful unification of all souls before Fuyutsuki turns him off.

Keel as seen in the Neon Genesis Evangelion series

Keel at a meeting with the Human Instrumentality Comitee

Keel smiling before being turned into LCL

Keel's remains after being turned into LCL

An artwork of Keel

Sketch of Keel and the cast of Neon Genesis Evangelion 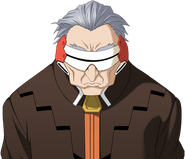 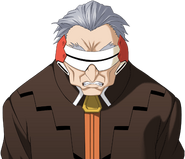 Keel represented by his monolit in a meeting with Gendo