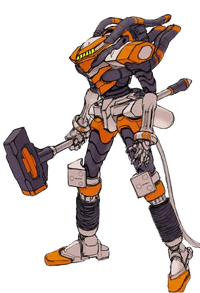 Jet Alone 2 (JA 改[?], "JA Kai") is a further development of the Jet Alone project. This is found in the game Neon Genesis Evangelion 2.

The JA that appeared in Episode 7 of TV series was the prototype model, and according to the setting, this unit with an onboard S² reactor was actually in development at the time.

Initially afraid of having an onboard fission reactor, but forced to meet the deadline for the public test, they fitted the prototype with a nuclear reactor taken from the "old system", which ends up running amok.

This model contained an onboard reactor was treated as experimental at the time. By coincidence, it slipped through the grasp of those who conspired to have it sabotaged, thus narrowly escaping disassembly.

The body of this robot, with its reactor, is slightly smaller than the original JA. But, it's still powerful and nimble, and in exchange for only having to equip a single cooling system, it consumes massive amounts of water, requiring the presence of a nearby water supply during periods of extended operation. Its weapons include a giant hammer and a ring attached to the wrist that emits an electrical discharge.

Retrieved from "https://evangelion.fandom.com/wiki/Jet_Alone_2?oldid=40049"
Community content is available under CC-BY-SA unless otherwise noted.