Evangelion
Register
Don't have an account?
Sign In
Advertisement
in: Organizations, Neon Genesis Evangelion, Rebuild of Evangelion,
and 2 more
English

This article contains content from the EvaGeeks.org Wiki article Japanese Strategic Self Defense Force. Please view that page's revision history for the list of authors.

Formed after the events of the Second Impact, The JSSDF are the first line of defence for the country of Japan, more specifically the city of Tokyo-3 and are often seen ineffectively engaging threats using conventional weaponry including tanks, warships, various aircraft and the deadly N² mine before Evangelion units can be dispatched to properly handle the situation.

The JSSDF works as part of the new United Nations forces and so oftentimes vehicles used by the JSSDF are labelled with UN insignia.

As a result of World War II, article 9 was added to the constitutions outlawing war as a means to solve international conflict. As a result of this, the Japan Self-Defense Force in order to defend Japan.

A few years after the world altering event that was the Second Impact, rising global tensions between China and the Nansha Islands lead to the removal of article 9 and the creation of the Japanese Strategic Self-Defense Force. Unlike the JSDF, the JSSDF is a military organization resulting in soldiers who are combat experienced and hardened.

As the first angel to appear in Tokyo-3, the JSSDF served their role as the first line of defense by launching an all out attack on the angel using a wide variety of conventional weaponry ranging from aircraft to tanks. After sustaining heavy damages to their forces at the hand of the angel and their attack having had seemingly no effect on the angel, they resorted to their final and most dangerous weapon, the N² mine, a weapon so powerful its use would require maps to be redrawn.

While the mine was somewhat effective, it ultimately still failed to destroy the angel, instead only temporarily stopping its attack. With all options exhausted, the JSSDF granted special agency NERV command of the operation resulting in the first launch of Evangelion Unit-01.

After failed to destroy the angel following it's separation into two separate ententes, NERV's authority over the operation was revoked and granted to the JSSDF. As was the case with Sachiel, their solution to the problem was once again an N² mine. While the mine once again caused catastrophic damage to the surrounding area and failed to destroy the angel, their attack bought NERV six days which were effectively used to prepare Shinji Ikari and Asuka Langley Sohryu for their inevitable rematch with the angel.

After the death of the final angel, Kaworu Nagisa, SEELE became fearful of the threat Gendo Ikari posed to their plans for Human Instrumentality and leveraged their immense influence over the Japaneses government to launch an all out assault on the GeoFront and NERV Headquarters by claiming NERV was attempting to start the third impact. As a result, the Final JSSDF mission would commence.

This final mission had a few key objectives; Eliminate all living Evangelion Pilots, disable all Evangelion units and safely recapture the magi system. Soldiers and a wide variety of weaponized vehicles were stationed outside the Geofront with multiple teams of infantry sent to ruthlessly exterminate any NERV personnel in sight through the use of any means necessary. These methods often involved mass shootings and extensive use of flamethrowers. With little budget for defense, NERV stood no chance at defending their facilities with the exception of the central command room as the JSSDF soldiers had to act with great restraint lest they damage or destroy the magi.

With Asuka deployed in unit-02 and Rei Ayanami in Terminal Dogma, the only pilot the JSSDF had to target was Shinji. After locating and preparing to execute him, the attempt ultimately failed to do so as they were more concerned with monologuing than they were with the hailstorm of bullets coming their way from Misato Katsuragi.

At some point during this time, the JSSDF gained access to the Evangelion cage and used the hardening liquid, Bakelite, to seal unit-01 effectively making it useless.

Awakening in unit-02 with an new found understanding of the true nature of the Evangelion, Asuka began her strike against the JSSDF forces outside the Geo Front where she destroyed countless JSSDF weapons including a large ship and multiple aircraft. While they managed to cut off the unit from external power by severing its umbilical cable, the JSSDF failed to stop the unit despite launching two N² mines, a failure which would prompt SEELE to unveil their final weapon, the Mass Production Evangelion.

Meanwhile, Misato and Shinji slowly traversed towards unit-01 managing to evade JSSDF forces for the most part up until they reached the final elevator leading to the Evangelion holding cage. In an act of self sacrifice, Misato died at the hands of JSSDF forces allowing Shinji to reach the Evangelion cage.

By this point, JSSDF soldiers had breached NERV central command and were slowly making their way towards the command deck where the final NERV personnel were taking cover. Before they could make any significant progress in recapturing the magi, the third impact had already begun leaving the fate of the JSSDF past that point unknown.

Similarly to Sachiel in Neon Genesis Evangelion, the JSSDF served their role as the first line of defense by launching a failed attack against the first angel to attack Tokyo-3 using conventional weaponry including a wide variety of ground and air based vehicles. In a final attempt to stop the angel, an N² mine was deployed. While at first it appeared to have defeated the angel, it quickly becomes apparent that their tactics have had almost no effect. With all their weapons proven ineffective, command of the operation was handed to NERV leading to the first launch of Evangelion Unit-01.

Once again serving as the first line of defense, the JSSDF attempted and failed to destroy the seventh angel using conventional weaponry before it could enter Tokyo-3. While the angel was eventually stopped, as usual the JSSDF played no role in its defeat.

While it is unclear what state the JSSDF were in and what their operations looked like after the near-third impact leading into the eventual third impact, it is likely they continued to operate in some capacity, though the nature of those operations is entirely speculative as nothing has been confirmed.

Following the near extinction level event that was the Third Impact, the JSSDF ceased to exist.

The JSSDF’s mechanized ground forces operate conventional vehicles like Main Battle Tanks (which appear to be based on the Type 74 series), Humvees, mobile rocket and artillery MLRS platforms and other mainstays of modern land warfare. These are shown bombarding the Angel Sachiel with dozens of tanks, assault guns, and tracked missile carriers, as well as VTOL gunships and five ballistic bombs; The camera shakes to emphasize the intensity of the bombardment.

The JSSDF's air wing operates a fleet of Heavy Fighter Jet-VTOL aerial gunships with firepower equal to that of an attack helicopter. Its arsenal also includes smaller VTOL aircraft (which are more mobile), fixed-wing bombers for deploying ballistic weapons, and large “flying wing” craft used to transport Evangelion Units(be it shipping an Eva between North America and Japan, or deploying Eva(s) directly into combat against Angels). The Jet-VTOL were the first units deployed against Sachiel.

Frontline infantry forces wear black bodysuits and helmets, while officers and rear-guard staff wear berets or baseball cap-like hats. Despite being frontline, general infantry appear to wear light combat armor as their suits cannot stop .45ACP rounds (as seen in End of Evangelion), apparently sacrificing safety and survivability in exchange for rapid deployment and maneuverability; Frontline personnel carry ballistic shields when assaulting fortified positions to compensate for their light armor. JSSDF infantry tactics are demonstrated during the assault on the GeoFront and specifically NERV HQ, a lightly guarded facility built to withstand Angel attacks, in which three JSSDF platoons infiltrate the exterior quietly and only engage in combat with heavy weapons once well within Central Dogma

JSSDF Infantry utilizing an M2 Flamethrower, an example of heavy weapons in their arsenal

A full body shot of frontline infantry, notice the combat armor only defends the most vital of areas 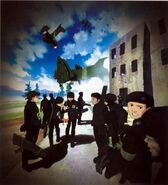 JSSDF Infantry just before an operation