This article has a collection of images to further represent its content. To see its gallery, visit Israfel/Gallery.

The Twin Angels of Poetry, Music and Dance

Both of You, Dance Like You Want to Win![NGE]
Stage 22: Asuka Attacks[Manga]

Israfel (イスラフェル[?]) (Arabic: إسرافيل) is the 7th Angel, makes an appearance in the TV series and the manga. It is preceded by Gaghiel and succeeded by Sandalphon.

After emerging from the ocean, Israfel was engaged by Asuka and Shinji. Defying orders to attack in sync with Shinji, Asuka assaulted the Angel alone, cleaving it in two. Shocking everyone, Israfel split into its twins, and decisively defeated Asuka and Shinji. To NERV’s embarrassment, the UN Secondary Command was allowed to take over the battle, and an N² depth charge was dropped on the Angel, vaporizing 28% of its mass. The Angel was incapacitated for roughly six days, during which time it recovered from its injuries.

Israfel was defeated through a synchronized attack by Shinji and Asuka, concerted via a musical score and with the memorization of numerous dance moves, first forcing the Angel to split into its twins, then back into its singular mode, this time with the two cores exposed which were destroyed simultaneously. 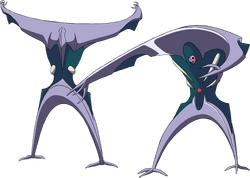 Israfel has the appearance of a massive, vaguely humanoid creature, similar to Sachiel. Israfel has a face/mask, reminiscent of Sachiel’s, which resembles a yin-yang symbol. Israfel has a pair of razor sharp claws and a weak energy beam (compared to other Angels).

Its A.T. Field appears to be relatively weak. It has two cores located in its chest, matched on either side of its center torso by four external bone-like rib structures. Israfel’s most notable weapon is its ability to split itself into separate, twin Angels, referred to as "Alpha" and "Beta" in the English translation and "Kou" and "Otsu" in the original Japanese.

The twin Angels are almost identical in appearance and properties to the original (except in color scheme). Both have faces/masks with three eye holes and possess their own cores, but without the rib structures. They (apparently) use synchronized tactics to fight enemies. Both cores must be destroyed at the same time, or they will heal each other.

A radically different version of Israfel appears in the manga. Like the other Angels, Israfel is given human form, in this case as a pair of young mixed-race twins named Cecilia and Makoto de Nuovo. While Makoto is fully aware of his Angel heritage and can transform at will, Cecilia is unaware of her true nature, and can only transform into her Angel form during a full moon, leaving no memory of the transformation afterwards.

Cecilia initially encounters Shinji while looking for her lost cat, and becomes infatuated with the youth after he saves her from the Angel Ramiel . Makoto is scornful of Shinji, and fears that his sister's crush might lead to her death at his hands. When Iruel launches an attack on the NERV Academy, the two halves of Israfel come to the aid of the students. The two rescue Toji Suzuhara and Hikari Horaki from Leliel, stating that despite being Angels, they do not wish to harm innocent humans. At the close of the series, Makoto arranges for he and Cecilia to leave Japan and return to Italy with their mother, no longer wishing to drag his sister into the conflict with NERV. Though Cecilia is saddened by the thought of leaving Japan, Makoto comforts her and tells her that he's sure she'll see Shinji again someday.