This article has a collection of images to further represent its content. To see its gallery, visit Ireul/Gallery. 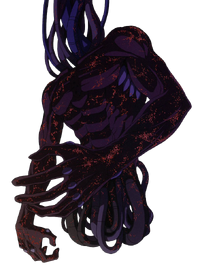 The Angel of Terror

Ireul (Katakana:イロウル), The eleventh Angel. Ireul makes an appearance in the Anime, it does not appear in the manga and in the Rebuild of Evangelion. It is preceded by Sahaquiel and succeeded by Leliel.

It appears in the Pribnow Box deep in the GeoFront, where it is initially mistaken for corrosion before spreading to where the pilots are taking part in tests. Ritsuko and Misato, prior to understanding what they were up against, attempted to destroy the "corrosion" with lasers, only to have an A.T. Field materialize to block their efforts. They soon discovered that the Angel is vulnerable to ozone and so pumped large amounts of it into the area of infection. The tactic temporarily stopped the Angel's spread, but after only a few seconds, it adapted to the ozone, and even absorbed it to increase its strength before suddenly mutating into a form resembling electronic circuitry. Linked into the Pribnow box computer systems, the Angel electronically hacked into the MAGI computer systems, protecting the hard connections with an AT field on the cables to prevent it from being cut off. While inside, it read many critical files and attempted to initiate a self-destruct sequence before being slowed down long enough by Ritsuko to allow her in turn to initiate the Angel's destruction by using the last "free" MAGI to set the Angel on an evolutionary path to its own annihilation.

Ireul is a nano-scale entity, similar to a virus. In addition to its A.T. Field, it demonstrates an ability to adapt and evolve to almost anything. Rather than "moving" in the conventional sense, the Angel seems to simply spread by rapidly reproducing at the cellular level. It is not known whether or not Ireul has a core.

Retrieved from "https://evangelion.fandom.com/wiki/Ireul?oldid=32577"
Community content is available under CC-BY-SA unless otherwise noted.