Interface headsets (インタフェイスヘッドセット[?], "intāfēsu heddosetto") are small devices worn by Evangelion pilots in order to improve their Synchronization rate with their units.

The interface headsets are often two distinct nodes which attach to a pilots head. They, along with plugsuits, act as a bridge between a pilot and their Evangelion in order to improve a pilots synchronization rate. Like plugsuits, the headsets are not needed to initialize an Evangelion however the improved rates allow for better control of the unit giving the pilot a major combat advantage however unlike plugsuits, the headsets are likely a more critical component since they're still used even when a plugsuit isn't. This disparity could also be explained by the convenience of wearing them compared to a plugsuit.

Interface headsets share many design ques as most feature a black parting line are often colored to match their corresponding plugsuit, however this isn't always the case as characters like Asuka Langley Sohryu and Mari Makinami Illustrious wear the exact same headset across multiple different colored and styled suits. One common variance between the headsets is where they sit on the head with some sitting on the front, some sitting on the sides and some much further back.

Many English-speaking fans incorrectly refer to the interface headset as "A10 nerve clips", rather than its official name. Aside from Asuka's, none of the headsets are actually composed of hair clips; additionally, there is no partial or complete evidence that they are directly related to A10 nerve synchronization.

Interface headsets mainly originating from Neon Genesis Evangelion, these headsets are used all across the Evangelion franchise.

The interface headset seen most often is composed mainly of two pieces which sit in the pilot's hair, near their temples, and are connected by some type of hairband, which is usually covered by the hair itself. They come in a wide variety of colors to match their corresponding plugsuits. 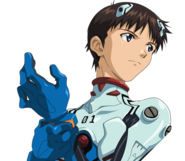 Worn by Asuka Langley Sohryu, this headset differs from the standard as they act as hair clips to hold her hair back leading to them being worn very differently as they're attached to the back of the head instead of the front. The clips are taller and wider with pointed tops compared to the standard interface headset though they share much of the same design language having a thin black parting line for detail. Unlike the other pilots, Asuka is rarely seen without her headset on as they show shes an Evangelion pilot, something she uniquely takes great pride in.

This headset is worn exclusively by Asuka and is used alongside nearly every plugsuit across the franchise with the only notable exception being the TEST plugsuit which has an interface headset of its own. It is also worth noting that the headset worn alongside the Euro-NERV trial plugsuit is identical in form, however it appears to have a different color scheme using two shades of red instead of being all one color. 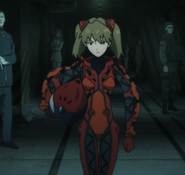 Interface headsets introduced in the Rebuild of Evangelion series of films.

Worn by Asuka Shikinami Langley, this headset is specifically designed to be worn alongside the TEST plugsuit and therefore matches its aesthetic. Although somewhat similar to the hairclip headset in that it's worn at the back of the head, the TEST interface headset are much larger and more bulbous. There are also large extensions crossing the sides of the head with bright green at the end, almost like antenna, though the purpose of these extensions is unknown.

Worn by Mari Makinami Illustrious, this headset greatly differs from the standard as instead of clipping to the pilots hair, the modules are attached together by a band which then holds them onto the users head. The shape of the headset units themselves are also quite unique as they're flat triangles which rest over the pilots ears. Like many other interface headsets, the headband headsets share the black lining detail.

This headset is worn exclusively by Mari and is used alongside every plugsuit she wears.

Mari wearing her hairband headset with plugsuit 05 from Evangelion 2.0.

Mari wearing her hairband headset with the Customized Entry plugsuit from Evangelion 2.0

Worn by Rei Ayanami, this headset is nearly identical to that of the standard headset however it is styled to be sharper in appearance by having harder edges with a glowing green rectangular detail where there is normally a dark circular one. The common black line detail is also colored red, a change which persisted even after the headset changed from black to white. Beyond the minor aesthetic modifications, this headsets silhouette is identical to the standard and from a distance, it is drawn in the same way making its differences tough to spot outside of a close-up scenes. 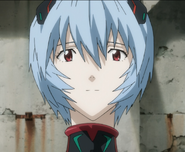 In addition to various types of interface headsets, the Rebuild of Evangelion series of films also introduces a fluid used in tandem with interface headsets and plugsuits for synchronization. While not explicitly named and while no use was specifically prescribed to the fluid, visual ques including it glowing during the synchronization process and the fluid being held and circulated in pipes connecting the pilot to the plug heavily implies it's used as a form of directly connecting the pilot to their Evangelion.

This fluid is only seen with old and unspecified suits including Mari's customized entry plugsuit and Asuka's Shikinami series trial plugsuit. The colors of the fluid appear to vary between the two suits (or the cables are different colors)m however they both glow the same when in use. 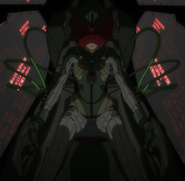 Shikinami series trial plugsuit fluid from Thrice Upon a Time

Worn by Kotone Suzunami, this headset is very similar to the hairclip headset in shape and size, however it's quite unique as unlike any other headset, the test type headset is dichromatic with a pastel green on the right and pastel purple on the left. 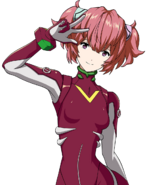 Kotone wearing the Test Type headset with her original plugsuit 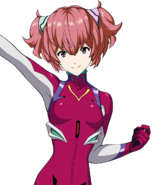 Kotone wearing the Test Type headset with her revised plugsuit