This article contains content from the EvaGeeks.org Wiki article Extracanonical Mecha. Please view that page's revision history for the list of authors.

This article has a collection of images to further represent its content. To see its gallery, visit Insubstantial Angel/Gallery. 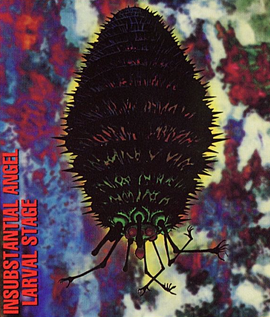 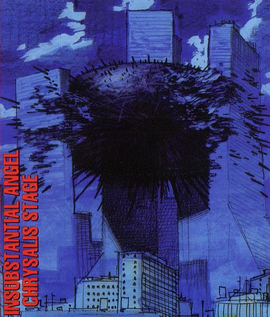 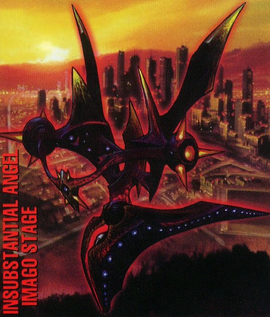 The Insubstantial Angel is an Angel whose design concept seems to take what Ritsuko Akagi said about Sandalphon's "chrysalis" to heart, by having the entity go through larval and pupal (chrysalis) stages before reaching adulthood ("imago"). As a chrysalis, it can teleport short distances and in its true form can levitate, extend the three spikes from each spinning wheel-like structure on its sides into a blade, and fire green energy balls from it's body.

It has no known name, although its Bandai Carddass cards refer to it as "Insubstantial Angel". Because its Core is contained within the body of Mayumi Yamagishi, the Angel is forced to leave during battle with the Evangelion units to give Shinji Ikari and her time to think about what to do.

In its first form is a giant floating larva. From its lower part several thin legs emerge. In this state, the angel can teleport at short distances.

In many lepidoptera, the pupa is called chrysalis. After spending some time in its floating larval state, the angel forms a gigantic chrysalis embedded between buildings. After staying a brief period of time, he reaches adulthood and assumes his true form.

In its Imago form, the angel is a gigantic floating creature, whose appearance is vaguely resembling an insect. It has a thin and branched body in an exotic way, without limbs.

Retrieved from "https://evangelion.fandom.com/wiki/Insubstantial_Angel?oldid=39528"
Community content is available under CC-BY-SA unless otherwise noted.