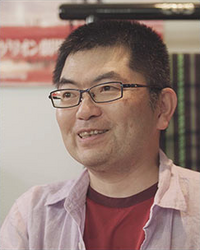 Yamashita was born in the Gifu Prefecture and is a graduate of the Nagoya University Of Arts.

Outside animated and manga works, he's also illustrated for specialized magazines as seen when he drew redesigns for the ν Gundam and the Sazabi in Cyber Comics.