This article has a collection of images to further represent its content. To see its gallery, visit Iblis/Gallery. 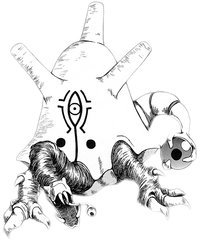 He that causes despair

Iblis (イブリース, Iburisu) is a non-canonical Angel that appeared in the Neon Genesis Evangelion RPG: The NERV White Paper.

Iblis appears as a giant, turtle like Angel with no rear legs and a long tail. Its head extends from the front of its shell on a fairly long and flexible neck. While there are ridges where the eyes would seemingly be, Iblis has no eyes in its skull, instead possessing a single yellow eye on the tip of a long tongue. Its shell alone is larger than an Evangelion, but despite this hard exterior its Core seems to be kept at the end of its tail away from the main body. While its combat tactics are unknown, artwork of the Angel tends to focus on the red, eye like design on its shell, perhaps implying some form of special ability.

Artwork of Iblis displays it appearing out of the ocean much like Sachiel from the original anime.

Retrieved from "https://evangelion.fandom.com/wiki/Iblis?oldid=38515"
Community content is available under CC-BY-SA unless otherwise noted.