Hikari Horaki (洞木ヒカリ[?], "Horaki Hikari") is a fictional character from the Neon Genesis Evangelion franchise. She is the class representative of Class 2-A, the class that Shinji Ikari and other Eva pilots attend.

She takes her role as the "class representative" seriously, and although she frequently bickers with Tōji, when Asuka asks her about her feelings for him, she tells Asuka that she is in love with him but she is unable to confess that.

Because a major part of her job is to make sure the class follows proper protocol, Hikari first appears to be slightly aggressive, hot-blooded and rigid. Despite being a bossy and quick-tempered tomboy, she might believe that herself, as she apparently thinks that her skill in cooking might be unexpected when she tells Toji about it (presuming that something so feminine would be at odds with her strong promotion of the rules).

She also appears to be Asuka's only and best friend. Hikari is an accomplished cook who appears to take care of her two sisters. Like presumably every one of Shinji's classmates, Hikari's mother is dead. However, no references were ever made as to whether her father is, either. Her given name, and that of her unseen younger sister, Nozomi, and elder sister, Kodama, is also in reference to the names of the trains of the Tokaido Shinkansen line. In a Gainax artwork picture she is shown in an orange plugsuit as the pilot for EVA Unit-05.[1] She is also featured in a live action deleted scene in The End of Evangelion. She is voiced by Junko Iwao in Japanese, by Carol Amerson in the English adaptation of the TV series, by Kimberly Yates in Death and Rebirth (Yates re-recorded Amerson's lines).

Hikari is not seen after the evacuation of Tokyo-3 following the battle with Armisael. However, it is implied that she lives in the suburbs, as Misato eventually sends Pen Pen to live with the Horaki family after that same incident in hopes that he would be safer with them. Hikari was seen earlier (in Episode 9) to have taken a liking to Pen Pen.

Hikari has brown hair with two pigtails and light purple decals. She has a few freckles. She is commonly shown wearing her most iconic outfit, which consists of a white shirt, blue dress, red bow, white knee-high stockings, and black Mary Jane shoes.

In the manga, Hikari is depicted with a slightly different shade of hair. She is not seen as much with Asuka as she is in the anime, though they are still shown to be good friends, and her feelings for Toji are stronger than they are in the anime, providing grounds for a major tragedy when Toji is killed by Unit-01 during the Bardiel incident.

After Instrumentality is rejected, she is neither seen nor mentioned again.

In ANIMA, Hikari is now 17. She is involved in the war between the Euro Army and the NERV JAPAN - she's brainwashed by the Euro Army in order to pilot the EVA EUROII Heurtebize. Later, as she is released from her brainwashing, she senses a soul inside the Heurtebize (thought to be that of Asuka's mother) and she decides to stay with the Euro Army as a collaborator.

Despite her loyalties, she is shown to have a romantic relationship with Tōji Suzuhara and be good friends with Rei Six, saving her from being killed by Armaros, however she is later the subject of mind contamination by Armaros.

Hikari and her sisters Kodama and Nozomi are named after the three services of the Tōkaidō Shinkansen. Nozomi is the fastest train, followed by Hikari, and Kodama is the slowest.

Hikari Horaki (洞木ヒカリ[?], "Horaki Hikari") is a fictional character from the Rebuild of Evangelion movie series.

Hikari has shoulder length brown hair. She ties them in two pigtails at the back of her head with rubber bands adorned with two purple balls. She has fair skin and has freckles under her eyes. She is seen wearing her school uniform, which consists of a white shirt adorned with a red bow, a blue dress, brown shoes, and white socks. She is the class rep of class 2A.

In Evangelion: 3.0+1.0 Thrice Upon A Time, Hikari is an adult woman who dress very plainly, she wears sometimes a light beige tunic with a grey coat over it and black socks. She styles her hair in a single low ponytail, but changes it in a bun when carrying Tsubame Suzuhara in a cloth strap. She also wears a blue jeans pants.

Hikari is less prominent in Rebuild of Evangelion, appearing in a few scenes in Evangelion: 1.0 You Are (Not) Alone. The Rebuild version Hikari isn't as close friends with Asuka Langley Shikinami, in Evangelion: 2.0 You Can (Not) Advance when Hikari asks Asuka Shikinami if they can eat together, Asuka accepts but says that she isn't going to share her food, Hikari smiles and shows her bento box. She is last seen being shielded by Tōji from missile explosions during the Tenth Angel's attack on Tokyo-3.

In Evangelion: 3.0+1.0 Thrice Upon A Time, Hikari is an adult and lives in the survivor's village, with her husband Toji and her father Bunzaemon Horaki. Hikari and Toji have a baby daughter, called Tsubame Suzuhara. Like the others, she is friendly to Shinji and Rei, but realizes the Rei clone is not the same they used to know, and gives her the name "lookalike". Rei is very curious at this child, and Hikari explains she needs her milk to grow. Hikari takes an active part in orientating Rei, helping her to understand village life and find a place in the community.

Hikari and her sisters, Kodama Horaki and Nozomi Horaki, appears in episode 31 of the kids train mecha TV anime Shinkansen Henkei Robo Shinkalion THE ANIMATION. They give a car ride to main Shinkalion protagonist Hayato Hayasugi. The cameo is notable for being Kodama and Nozomi's first on-screen appearances in any Evangelion-related media. Junko Iwao, Hikari's voice actress in the Evangelion TV anime, voices her and her sisters during the episode.[1]

Hikari in the opening of Neon Genesis Evangelion

Hikari with her classmates after Misato's arrival to school

Hikari with Asuka in the park

Hikari in her school uniform

Artwork of Hikari as an Evangelion pilot

Sketch of Hikari and the cast of the series

Artwork of Hikari with the cast of the series 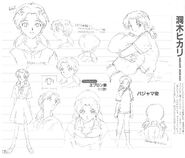 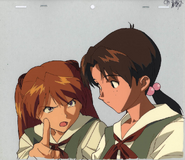 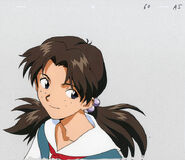 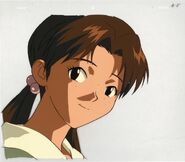 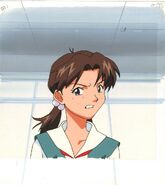 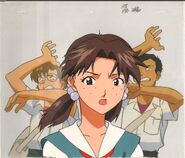 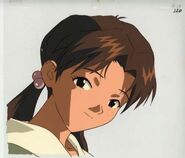 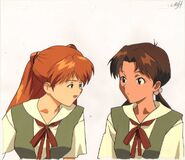 Hikari on the cover of the Chapter 8 of ANIMA

Artwork of Hikari with the children 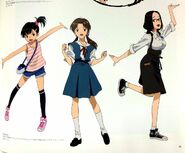 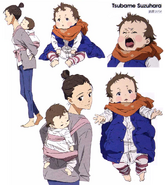 As seen on Evangelion Battlefields 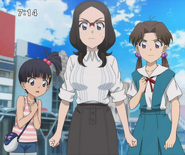