Evangelion
Register
Don't have an account?
Sign In
Advertisement
in: Rebuild of Evangelion, Religious and Esoteric References, Science
English

A halo (天使の輪[?], "tenshi no wa") is a ring of energy that mainly appears in the Rebuild continuity.

Halos appear to represent "divine" (i.e. supernatural and/or abnormally powerful) manifestations, such as the power of an Angel or the awakening of an Evangelion.

The only Angel that has not displayed halo so far is the 10th and only the Third Angel's halo has been shown to be actually substantial. 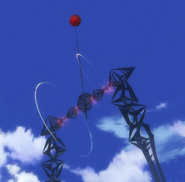 The halo motif is put to limited use in the original series. Most notably, one forms over the head of Unit-00 as it transitions into a giant Rei, moments before self-destructing.

Halos are a Christian visual motif associated with angels and holy figures (such as Jesus Christ).