This article has a collection of images to further represent its content. To see its gallery, visit Gaghiel/Gallery.

The Angel of the Fish

Gaghiel (ガギエル[?]) (Hebrew: גגיאל) is the 6th Angel, an aquatic, shark-like being. It makes an appearance in the TV series, and briefly in the manga. It is preceded by Ramiel, and succeeded by Israfel. 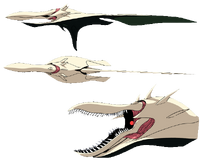 Gaghiel has a very large body, matching in size to Iowa-class battleships (which are about 270 meters long), and easily overshadowing an Eva. It has very large jaws, filled with sharp serrated teeth. Its core is also located in its mouth. Its skin is tannish in color, with a black outline. It is a strong and durable angel, destroying many of the UN Pacific fleets ships with its body. It also has a face-plate yet again resembling the one Sachiel grows after being attacked by an N2 mine. However, it does not generate a visible A.T. Field, though it uses it to some degree, as it is not damaged by the firepower of the fleet.

Gaghiel literally means Roaring Beast of God. It is named after the Angel of the Fish. His appearance resembles the Leviathan, a gigantic mythological sea monster, that appears in the book of Job and is usually compared with the crocodile or the whale. It´s sometimes associated with Lucifer, the fallen angel.

Gaghiel attacked the UN Pacific fleet as it was delivering Unit-02 and (secretly) the preserved embryonic Adam to NERV. Gaghiel was searching for the Adam embryo, but because the presence of the embryo was secret (apparently even from SEELE), NERV officially reported that Gaghiel was drawn by Unit-02. It managed to damage or destroy almost one third of the UN's combined fleet.

Gaghiel fought with Unit-02, piloted jointly by Asuka Langley Sohryu and Shinji Ikari in their first battle together. Asuka brashly challenges Gaghiel in Unit-02 wearing only B-type equipment (unsuited for marine combat). Gaghiel leaps from the water and onto Unit-02 and the ship's deck. A miscalculation by Asuka makes Unit-02 step onto a flight deck elevator which collapses, throwing the Eva and the Angel into the water, where Asuka and Shinji find themselves immobilized. The Angel bites down on them, trapping them in its jaws. Misato hatches a plan, and Unit-02 forces the Angel's mouth open (though only with Asuka and Shinji working and thinking in unison), allowing a pair of scuttled battleships to lodge in its mouth (knocking out most of its teeth in the process) and fire (via remote control) at the Angel's core, then self-destruct inside the Angel, causing it to inflate and explode, killing it.