This article has a collection of images to further represent its content. To see its gallery, visit Fourth Angel/Gallery.

Fourth Angel' (第4の使徒[?], "Dai 4 no shito") is the 4th Angel belonging to the Rebuild of Evangelion movie series. It is introduced in the movie Evangelion: 1.0 You Are (Not) Alone. It is first seen attacking Tokyo-3, the Angel makes it way towards the fortified city and engages in combat with Evangelion Unit-01 during its first operational mission.

Fourth Angel's role in Evangelion: 1.0 You Are (Not) Alone is largely the same as its role in the TV anime series. Its design is almost identical with few apparent modifications; however, some minor differences can be seen. Most obviously, when making its A.T.-Field-assisted jump, a large halo appears briefly above its head. Additionally, upon revealing its second face, casting its A.T. field, and prior to dying, the eyes of Fourth Angel's second face glow a bright red. Another minor design change includes a blood color change from blue to red to correspond with the other Angels. 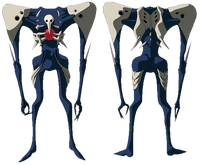 Fourth Angel's body is a tall and thin humanoid body, slightly larger than an Evangelion, which functions on both land and in water. Its proportions do not match those of a human; its arms are long enough to reach below its knees and its legs and feet are elongated and disproportionate. It lacks a proper humanoid head and neck, but like other Angels, contains a core in the center of its solar plexus. Its head, barely mobile, appeared to primarily be made of bone and is structured much like a bird's, even having a long beak. After the Angel regenerates from the N² mine, a second head emerges from its body, with a shorter beak than the first, pushing the first one slightly upwards. Fourth Angel has red irises, which are able to be seen deep within its head in the eye sockets. Fourth Angel possesses blood of a bluish-purple color, making it unique among Angels for whom blood has been observed.

Unusual among Angels, Fourth Angel possesses a respiration system based in the thighs and crotch, breathing in through gills in the thighs and exhaling through a set of nostril in the crotch area. Said gills also serve as an underwater propulsion system. The Angel's natural weaponry consist of two lance-like bone structures that extend from its forearms and are shown to be able to be energized to increase their destructive capability. These are physical structures that serve as the Angel's ulna or outer arm bone. After the Angel regenerates from the N² Mine attack, it develops the ability to fire a long-range energy blast from the eyes of its second face, which results in crucifix-shaped spikes of energy. While not a flight-capable Angel itself, Fourth Angel demonstrates the ability to use its own A.T. Field to enhance its jumping ability to great lengths. Fourth Angel is also capable of altering its body shape and muscle mass, increasing it when under strain. As a last resort, it can wrap itself into a ball around its opponent and self-destruct.