This article largely borrows its content from another wiki, such as Wikipedia or EvaGeeks. Substantial cleanup and reformatting may be needed.
This article contains content from the EvaGeeks.org Wiki article Evangelion Melee Weapons. Please view that page's revision history for the list of authors.

This article contains content from the EvaGeeks.org Wiki article Evangelion Ranged Weapons. Please view that page's revision history for the list of authors.

A wide array of weapons are used by Evangelion units throughout the course of the different continuities they appear. Although designed to help the Evangelions in their fights against the Angels, these standard weapons have generally unpredictable results, as they are merely Evangelion-sized versions of standard human weapons (most of whom have little effect other than making the target mad).

(プログレッシブ・ナイフ). A combat knife contained inside the left shoulder pylon of an Evangelion who uses it, and is one of the Evas' basic weapons. The blade of the knife vibrates at an extremely high frequency,[1] increasing its cutting sharpness to the point that it can cut through the target at a molecular level. It is strong enough to pierce an Angel's core with little trouble. Unit-02 has two progressive knives.

No other Evangelions other than Unit-00', Unit-01, and Unit-02 are ever seen using Progressive Knives (in non-canon materials, including video games or model kits, Unit-03 and Unit-04 are seen utilizing the same Progressive Knife as Unit-01).

(ソニック・グレイブ). A spear-like weapon used to slice Israfel in half in Episode 09. It also appears in Episode 19, but isn't used. In real life, a glaive is a spear shaft containing a knife at the end rather than a spearhead. This may mean it's based on the same engineering as a Progressive Knife, but with an extended range.

(スマッシュホーク). An axe-like weapon, being able to be held with either one or two hands. Unit-02 sortied with it in Episode 16, but doesn't use it in combat against an Angel. Also maybe based on the Progressive Knife engineering, utilizing sonic vibrations to strengthen the sharpness of the blade with it being of a shorter length than the "Sonic Glaive" spear, but containing a wider blade for greater damage.

(パレットガン). Sometimes alternatively called Pallet Gun, it is the standard-issue rifle used by Evangelion units. It resembles a Steyr ACR.[2][3] This giant automatic rifle is proportionately sized to match the Evangelions, so it can wield the rifle just as a human would use a conventional assault rifle. The Pallet Gun is seen in Episodes:

It is unknown why this weapon is referred as a "Pallet" Gun. Bonus materials and production notes don't explain the naming either, but do refer to it directly as such.

(ハンドガン). Resembles a Desert Eagle Mark XIX. Used by Unit-01 against Leliel in Episode 16 but it is ineffective.

(ポジトロンライフル). The Positron Rifle (Prototype 20 with Toroidal Accelerator) is a shoulder-mounted (the shoulder pylon of the equipped arm is extracted). Can fire rounds into low Earth-orbit, though the power of the shots lowers to being ineffective from a long range. Not a very mobile weapon either since it requires an external power cable to power its function. It still uses a finite amount of ammunition, about 8 rounds.

A prototype, originally requisitioned from the JSSDF's R&D labs, where it was known as the SDF's Automated Positron Rifle.

An upgraded, modified, or Eva-specific version of the weapon is used against Ramiel.

Appears in Evangelion: 1.0 You Are (Not) Alone, used by Unit-01. Unlike its television version, this close-in melee weapon has a slightly-altered blade shape, but similar to a jackknife, the weapon can be creased and stored into the left shoulder pylon. 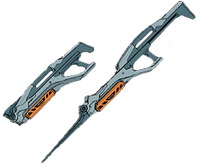 Appears in Evangelion: 2.0 You Can (Not) Advance. It is used by Mari in Unit-02 when she confronts the Tenth Angel. It resembles a rifle with a blade instead of a barrel. It was designed by Ikuto Yamashita.

Appears in Evangelion: 3.0 You Can (Not) Redo, used by Unit-02'γ against Evangelion 13. It can separate into two swords. It slices through Evangelion 13's RS Hoppers with little effort but is unable to harm the Evangelion itself.

Used by Unit Mark.09 in Evangelion: 3.0 You Can (Not) Redo. It is taller than a common Evangelion. Mark.09 uses it against Unit-02'γ and decapitates Mark.06 to release the sealed Twelfth Angel.

Gatling Gun (ガトリングガン): Appears in Evangelion: 1.0 You Are (Not) Alone. A massive Gatling gun, utilized by Unit-01 against Fifth Angel. When fired, this weapon drops a enormous amount of shell casings that crushed several vehicles on the ground. However, it deals no visible damage to the Angel.

First appears in Evangelion: 1.0 You Are (Not) Alone. Essentially the same weapon as the Pallet Rifle, it is brought up for use against Fifth Angel but not taken. Wielded again by Unit-01 against the Ninth Angel in Evangelion: 2.0 You Can (Not) Advance, but not used. Finally, Unit-02 uses two of these rifles against the Tenth Angel, successfully in breaking some of the Angel's A.T. Field layers.

Weapon mounted in a treaded machinery, it is used against the Sixth Angel. This weapon uses Japan's whole electricity supply as its power source. A larger version of it is installed as a part of Evangelion Mark.4444C, with power supplied by multiple Mark 44Bs. .

Appears only in Evangelion: 2.0 You Can (Not) Advance. Utilized by Unit-02 against the Seventh Angel.

As originally conceived, the weapon would use the Evangelions's A.T. Field to launch its projectiles. However, it was altered to electromagnetic propulsion during Evangelion 2.0's post-production.[13]

Appears in Evangelion: 3.0 You Can (Not) Redo, used by Unit-08 (both in α and β configuration). It can either be loaded with regular or special Anti-A.T. Field ammunition, special bullets that can break through any A.T. Field but this can't harm Evangelion 13 since it lacks one. Bullets don't deal any visible damage to both Mark.09 and Evangelion 13.

Appears in Evangelion: 3.0 You Can (Not) Redo, used by Unit-08β. It is basically a Evangelion-sized highly ineffective handgun that only does collateral damage, but is still able to destroy Mark.09's head.

Wielded by Mark.09. Its size is longer than two Evangelions. When not used, it can be unmerged into four 'tentacles'. Mark.09 wields this bizarre jetpack to escape from the AAA Wunder after retrieving Shinji.

Wielded by Evangelion Unit-00 during Operation Yashima, is used to protect Unit-01 against the Sixth Angel. It would reappear later in Evangelion: 3.0+1.0 Thrice Upon A Time. used in the hulls of multiple ships as another layer of protection against Evangelion Mark.4444C. Unlike the TV Series counterpart, that was a specially converted "shield" made from the heat shield on the underside of an SSTO spacecraft. The design of this shield is more shield like, with 4 handles around the interior, a pylon near the ground and a little window that can slide in and out for maximum protection. The logo is written in two laterals and in the interior part near the pylon. It was designed by Ikuto Yamashita.

Sometimes shorten as "Magoroku-E Sword" or "Magorox". Designed for the show by Ikuto Yamashita, but never used (it is in some production art and included with some models, though). It is a long sword for Unit-01's use. A dedicated scabbard for the Magorox can be attached to the left shoulder pylon of Unit-01 for storage. The shape of the blade resembles a katana.

Designed by Ikuto Yamashita, appearing in production artworks and included with some models. It is essentially a shortened version of the Magorox designed mainly, true to its name, for defensive purpose. As for the Magorox, a dedicated scabbard for the Counter Sword can be attached to Unit-01's left shoulder pylon for storage.

(大型破砕兵器デュアルソー). Designed by Ikuto Yamashita for Neon Genesis Evangelion 2. Appears in the manga. It is used by Kaworu in Unit-02 against Armisael. The Dual Saw is exactly what it's title states: a chainsaw with two blades placed beside each other. According to its description, this weapon is so big that "cutting" isn't the proper term to describe its action but "shredding" would be more fitting.

A javelin-like weapon that has appeared in multiple official illustrations, but no other related media.

(全領域兵器マステマ). First appearing in the Neon Genesis Evangelion 2 game and then appearing in Neon Genesis Evangelion: ANIMA, the All-range Weapon Mastema is a very unique weapon in that it covers all the ranges possible. Named after the fallen angel, it can be used as a N² Missile launcher, a gun or a blade. Even though it's a large weapon, it is surprisingly light, making it much deadly.

The Bizenosafune is a Zweihänder weapon used by Evangelion Unit-02 Type II. Derived from the Magorox, it is enhanced with A.T. Field and grows as the A.T. Field deployed by the Eva become stronger.

While the first Magorox was just a metal sword, the B-Stage Magorox's blade is infused with A.T. Field, making it able to penetrate enemies' A.T. Field.

One of a pair of Field Penetrator swords. Generates a special A.T. Field that can be tuned to penetrate a target's Field. Like the Vertex wings, the sword utilizes experimental field-induction elements. The arrangement of those elements affects the sword's field pattern. The sword is stored in a pylon capable of "baking in" specific arrangements. The shape of the sword slightly differs from that of its twin, the SRM-62b (Basara).

The old Pallet rifle was inefficient against the Angels, as its bullet movement energy was only 60 megajoules. This new Pallet Rifle, the "Powered 8", is updated with railgun-based technology to be more efficient. Researches are made to develop a long barrel type Pallet Rifle which would shoot A.T. Field to penetrate enemies' A.T. Field.

A stand-alone cannon with high-explosive ammunition. The barrel had once belonged to the Yamato warship, but now it is like a pistol in the hands of Super Evangelion.

Deutsch
Community content is available under CC-BY-SA unless otherwise noted.