This article has a collection of images to further represent its content. To see its gallery, visit Evangelion Unit-04 (Rebuild)/Gallery. 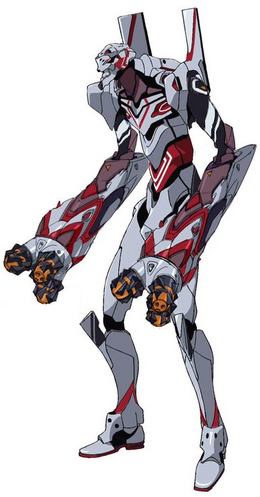 Evangelion: 2.0 You Can (Not) Advance (Mentioned)

Evangelion Unit-04 (4号機[?], "Yongōki", lit. "Unit Four") is an Evangelion unit in the Rebuild of Evangelion tetralogy. It is only mentioned in Evangelion: 2.0 You Can (Not) Advance but actually seen in a Evangelion: 1.0 You Are (Not) Alone-themed pachinko. It was destroyed during a test and therefore never saw any actual action.

Eva-04 is mainly silver with red, dark grey, black and white details. Its head greatly resembles Unit-01's, minus the horn, and bears a oversized forehead piece. Its eyes are red and, as nearly every other Eva units in the Rebuild continuity, its armor includes some glowing details (namely the yellow, red and white diamond-shaped shoulder pieces and the white forearms pieces). Aside from that, the Eva bears the same type of armor as the two previous Production Models. This includes several V-shaped armor plates on the torso and reduced shoulder pylons when compared to Eva-01's.

Virtually nothing is known about the precise features of the Unit-04. One could assume that it would have had Progressive Knives in its shoulder pylons as they are the same as Evangelion Unit-02's, as well as would have been compatible with the standard Evangelion armament (Pallet Gun, etc...). In the pachinko machine, it also appears wielding both a physical shield and the Lance of Longinus.

One known major feature of the unit though, should it have been successfully completed, would have been its engine which would have given the unit an extensive, if not unlimited, operational time.

Evangelion Unit-04 was a test subject for the installation of an experimental engine at the second branch of NERV, in the USA. This would have lead to extend the amount of operating time for the Evas. Unfortunately, a mysterious accident involving the engine occurred, which caused Eva-04, the second branch of NERV, as well as everything within an over 80-kilometer diameter to be obliterated in a massive explosion similar, but in lower scale, to the Second Impact, revealing a large energy cross rising from the sky to outer space.

In an official Evangelion pachinko machine in Japan (based specifically on Evangelion: 1.0 You Are (Not) Alone), once the player reaches a certain level, there is a short animation featuring Unit-04.[1] The scene shows the Sixth Angel during an attack on Tokyo-3 (the footage is spliced in from Evangelion 1.0). When it destroys some missile launching sites, Unit-04 suddenly appears floating over a hill, with Kaworu Nagisa controlling it by floating in front of its head. The Sixth Angel fires, but Kaworu's A.T. Field protects Unit-04. The Eva unit then charges forward with the Lance of Longinus. The Sixth Angel reshapes itself and fires again, but Unit-04 blocks the attack with a scaled-up riot shield (previously seen only in merchandise, never on-screen because of its impracticality in favor of A.T. Fields). After the Sixth Angel stops its attack, Unit-04 hurls the Lance of Longinus at the Angel, which penetrates its A.T. Field, and destroys it in this single shot. Kaworu and Unit-04 are seen casually standing on top of a lake at the end of the video.

Evangelion Unit-04, again piloted by Kaworu, can also appear as a selectable unit when fighting other Angels (such as the Fourth Angel, as demonstrated in the linked video).

Eva-04 is, aside from its overall redesign common to other Eva units, very much the same as its NGE/EoE counterpart. It has the same role and the same fate. One major difference though is the fact that it is not considered a "Production Model" but rather a "Next Gen Testbed" unit in the Rebuild continuity (much like in the Neon Genesis Evangelion Proposal where the Unit-04 was labelled as a "Test Type" unit).

Retrieved from "https://evangelion.fandom.com/wiki/Evangelion_Unit-04_(Rebuild)?oldid=33731"
Community content is available under CC-BY-SA unless otherwise noted.