This article has a collection of images to further represent its content. To see its gallery, visit Evangelion Unit-02 (Rebuild)/Gallery. 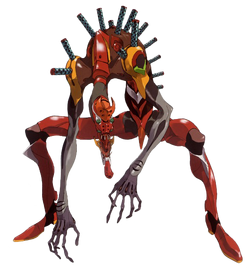 Evangelion Unit-02 (2号機[?], "Nigōki", lit. "Unit Two") is an Evangelion unit appearing in Rebuild of Evangelion. It first appears in Evangelion: 2.0 You Can (Not) Advance, piloted by Asuka Shikinami Langley, as well as briefly by Mari Makinami Illustrious during the battle against the Tenth Angel.

Notable design details will be carried on to the design for the subsequent Eva units, as well as the Unit-00'. The details are the reduced shoulder pylons and the sleeker and simpler chest plate. Eva-02's armor is mainly red, with white and yellow-orange details. The helmet of the unit bears four small green sensors, four nostrils in the middle of its "face" and a crescent-shaped piece on the forehead with four additional nostrils, forming two small horns.

Critically damaged by the Tenth Angel, it was salvaged.

Due to its status as a "Production Model", Evangelion Unit-02's original capabilities were geared only for direct, conventional combat. As such, while having immense physical capabilities and a potent A.T. Field, Eva-02 is not as powerful, nor as valuable as other Evas, such as the units 00 and 01. As a battle-oriented Eva, Unit-02 is shown to be capable of using different equipment fits, like the S-Type Equipment seen during the battle against the Seventh Angel. In addition, the Unit-02 is equipped with two Progressive Knives instead of only one like Eva-01. These Progressive Knives look like box cutters or straight potato peelers. The Evangelion is compatible with standard weapons like Pallet Gun, Thunder Spear or Super-Electromagnetic Crossbow. In 3.0, the Eva is equipped with two unique weapons: a double-bladed spear which can separate into two daggers; and an arm machine gun which can be interchanged with its prosthetic arm.

Fourteen years later, the Eva unit underwent several alterations and at least two full upgrades, code-named Eva-02'β and latter 02'γ. A notable change to it was that its left arm, lost in the battle against the Tenth Angel, was never regrown and was instead replaced by a fully robotic, multi-purpose prosthetic, capable of being fitted with various attachments such as a grappling hook, a regular arm, or a built-in machine gun, giving Eva-02 higher versatility and adaptability in battle. Also like other WILLE-controlled Evas, Unit-02 features a portable battery system to replace the previous cable-based one, allowing the Eva a greater range of mobility and greater duration on the battlefield, as the batteries last longer and can also be easily replaced.

Finally, the last notable feature of the Evangelion Unit-02 is its ability to assume a unique form, known as the Beast Mode. Activated using a voice-commanded passcode by its pilot, the various restraining bolts or "limiters" placed on the Eva's body are unlocked, allowing the Eva to access to its full range of capabilities and maximizing the synchronization ratios between pilot and Eva, thus vastly increasing Eva-02's battle prowess. In this mode, Eva-02 undergoes a gruesome transformation in which most of its armor plates are either broken off or consumed by the Eva's flesh. Its torso and neck become extremely elongated and it opens a massive maw of needle-like, serrated teeth. In 3.0, the upgraded Eva-02'γ retains this feature, though its transformation is much more radical. In this incarnation of Eva-02, it assumes an even more feral, almost tiger-like form with thicker teeth, paws and a tail.

Unit-02 debuts in the second film, Evangelion: 2.0 You Can (Not) Advance, along with its designated pilot Asuka Shikinami Langley, first battling and defeating the Seventh Angel using both the S-Type Equipment and the Super-Electromagnetic Crossbow.

Unit-02 is then seen during the battle against the Eighth Angel, deployed alongside Unit-01 and Unit-00. It uses both of its Progressive Knives to destroy the Core of the Angel, killing it in the process.

Unit-02 is then placed into storage in accordance with the Vatican Treaty, a law stating that no nation can have more than three active Evas. With Unit-03 arriving from North America, Gendo decided Unit-02 would be the mothballed Unit.

Mari later hijacks Unit-02 to fight the Tenth Angel. Pushing the Eva to the limit, Mari activates Unit-02's Beast Mode which significantly increases its combat ability and gives it a more animalistic appearance. However, she is unable to defeat the Angel and Unit-02 is severely damaged, losing its left arm and part of its head.

It reappears in Evangelion 3.0, as the upgraded Unit-02'. It is first seen, backed up by Unit-08, retrieving the Unit-01 which was concealed inside the tesseract. It later fights against Evangelion 13 and Evangelion Mark.09 to prevent Fourth Impact. It is finally heavily damaged when Asuka self-destructs it to destroy the Mark.09.

The Evangelion Unit-02 seen in the Rebuild continuity bears several references to the one seen in the Proposal, as it bears two horns. Otherwise, the Eva-02 has more white details than its NGE/EoE counterpart.

Retrieved from "https://evangelion.fandom.com/wiki/Evangelion_Unit-02_(Rebuild)?oldid=40132"
Community content is available under CC-BY-SA unless otherwise noted.