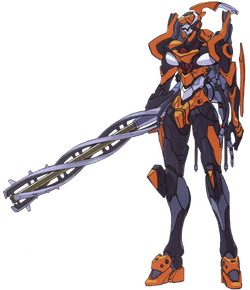 Those three units form the "Sword of Damocles" network. The Rei clones are usually stored in the Entry Plugs of the units in suspended state and are activated once a danger is confirmed. Each of them covers a part of the Earth, with one of them in Tokyo-3 airspace and the other two in space. This makes them effectively able to strike directly any target on the planet with their high-output laser.

At one point, it was planned to have EVA0.0 retrieve the Spear of Longinus on the Moon surface.

After the mind contamination of Rei Quatre, her EVA0.0 (Quatre) appeared to have been modified, using now a QR Signum (located in its chest) as energy source.

Retrieved from "https://evangelion.fandom.com/wiki/Evangelion_Unit-0.0?oldid=40230"
Community content is available under CC-BY-SA unless otherwise noted.