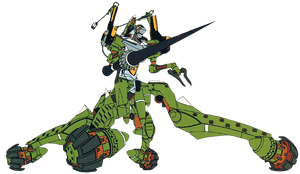 Evangelion Provisional Unit-05 (仮設5号機[?], "Kasetsu Gogōki", lit. "Hypothetical Unit Five") is one of the new Evangelion units introduced in Rebuild of Evangelion, making its first and only appearance in the second movie, Evangelion: 2.0 You Can (Not) Advance.

Evangelion Provisional Unit-05 (封印監視特化型限定兵器 人造人間エヴァンゲリオン 局地仕様仮設5号機[?], "Fūin Kanshi Tokuka Gata Gentei Heiki Jinzō Ningen Evangerion Kyokuchi Shiyō Kasetsu Gogōki", lit. "Seal Guarding-Specialized Model Limited-Use Weapon Android Evangelion Local Specification Hypothetical Unit Five") is the first Evangelion unit which is not built with a humanoid-like appearance, like Units 00–04. This could however be due to the fact that this unit wasn't fully completed during its first deployment, as its name suggests it. It is kept at Bethany Base to guard the sealed Third Angel and eventually recapture or destroy it, should the Angel escape.

Its upper body is fairly similar to the other Production Model Evangelions with its V-shaped torso armor with its head bearing a conical helmet with a glowing yellow visor. However the unit has completely mechanical arms, with its "hands" being claws and its right one mounting a spear. Its shoulder pylons are also different from the other ones in that they are used to gather energy rather than store weapons.

Its lower body is entirely made of prosthesis, with its "legs" being four appendages each equipped with a wheel at their end. These appendages are also equipped with thrusters to facilitate the maneuvers of this Eva.

Provisional Unit-05 has an extremely limited array of weapons (as suggested by its full designation) in that it has only one weapon: the "Anti-Angel Extermination Weapon Spear of Longinus Basic Type (Pseudo-Restoration)"[1]. It is a melee-only weapon with a glowing gem near its tip which is able to pierce an A.T. Field as one can observed during its fight against the Third Angel. Because of its unique configuration, this Eva can't use the standard Evangelion weaponry.

Due to the Eva's inhuman appearance, the pilot is required to use a special equipment with tubes attached to the wrists and a large helmet for movement.

Another noticeable difference is that it lacks an umbilical cord. Instead it gathers its energy from pantograph-like wires atop the shoulder pylons, which connect to the roofs of the various tunnels of Bethany Base.

It apparently can go berserk or at least partially, as Mari somehow "allowed" the Eva to take control of its own limbs during the battle against the Third Angel, as there wasn't enough power to synchronize her right arm with the Eva.

Unit-05 is piloted by Mari Makinami Illustrious during the opening scene of the movie, having been deployed to counter the escape of the captured Third Angel which was being held at the U.S./Russian Bethany NERV base. The fight results in the destruction of both the Angel and Provisional Unit-05, although the destruction of the Eva is heavily implied to be due to a sabotage of the unit.

The design seen in the preview of Evangelion 2.0 at the end of Evangelion: 1.0 You Are (Not) Alone is a little bit different of the final design in that it has a slightly different color scheme as well as a second spear in place of the left claw of the final design. The particular classification of the unit, "Provisional Unit", and its unique construction (i.e. with fully mechanical limbs) could be a leftover idea from Neon Genesis Evangelion Proposal, where the Unit-05 was classified as an "Experimental Type".

Retrieved from "https://evangelion.fandom.com/wiki/Evangelion_Provisional_Unit-05?oldid=39964"
Community content is available under CC-BY-SA unless otherwise noted.