"Unit-09" redirects here. For the Mass Production Unit-09, see Mass Production Evangelion#Specific Eva Units.
This article has a collection of images to further represent its content. To see its gallery, visit Evangelion Mark.09/Gallery. 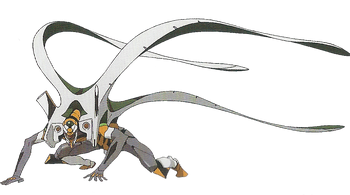 Evangelion Mark.09 (Mark.09[?], "Māku Nain") is one of the new Evangelion Units to be introduced in the Rebuild of Evangelion tetralogy.

Sent by NERV to attack the AAA Wunder in order to recover Shinji Ikari from WILLE, it is piloted by one of the Ayanami series clones.

Following the AAA Wunder's takeoff after Evangelion Unit-01 was placed in it as a power source, Evangelion Mark.09 attacks the fleet by surprise, with the Rei clone piloting it calling out for Shinji from the inside. During this mission, the Eva utilizes a strange piece of equipment on its back which is capable of morphing into a jet booster for flight. While under enemy fire, the Evangelion breaks a hole through the Wunder's structure and allows Shinji to get in its hand being attacked by Evangelion Unit-08 shortly after. Although it manages to blow Mark.09's head off with the use of a handgun and identifies it as an Adams' Vessel, Unit-08 is unable to stop the Mark.09 from taking off with Shinji in its hand, successfully accomplishing its mission.

Soon after, WILLE attacks the awakened Evangelion 13 by ramming the Wunder into it and unleashing their entire firepower on it, prompting Mark.09 to attack the ship by using its A.T. Field to create energy explosions, not unlike the ones used by the now-deceased Angels, growing a completely different head shortly afterwards, which prompts Ritsuko to refer to the Mark.09 as the Wunder's original master. The Evangelion then proceeds to land on WILLE's ship, changing to a darker color while releasing a blue ooze from its feet that pours into the ship's engine, hijacking its controls from the crew.

As the Wunder loses altitude, Unit-02'γ jumps onto one of the wings and shoots at Mark.09 with Anti A.T. Field ammunition, blowing off of the armored chestplate only to reveal a special armored plate created by SEELE to protect the core. Managing to evade one of the Mark.09 energy shots, Unit-02'γ activates Code 777, engaging it in combat and managing to tear the Mark.09's neck area. The Rei clone manages to contact Asuka, asking her what she would do if she was Rei Ayanami. Asuka tells her she doesn't know, prompting Rei to eject her entry plug, giving an opening for Unit-02'γ to fire its gun directly at the core through the entry plug slot. However, Mark.09 shines red and regenerates in a matter of seconds, prompting Asuka to identify the whole Evangelion as a core. Running low on battery, she activates the self-destruction mechanism of Unit-02'γ and ejects herself. The recently regenerated Mark.09 then reveals a concealed mouth in its head and crushes the head of Unit-02'γ seconds before the unit detonates, engulfing and destroying the Mark.09. The Wunder's crew regain control of the ship shortly after the Mark.09's destruction.

Overall, the Evangelion Mark.09 is almost identical to its predecessor Evangelion Unit-00 (in the Rebuild continuity). However it sports minor differences from it, such as more white highlights, a more prominent central eye, and an almost completely white helmet piece. Mark 09 also appears to be designed specifically for wielding the bizarre jet booster it is first seen with, featuring an extra plate around the torso and indentations that the booster locks into. During its first shown mission, it ends up decapitated and it mostly seen in this form until near the end of the 3.0. This decapitated visage, in conjunction with the scythe it wields, highly resembles that of a Dullahan from the Irish Mythology. At one point, when trying to take command of the AAA Wunder, it grows an organic head evocative of the AAA Wunder's bridge and bearing a passing resemblance to that of Unit-01 of the original series in its berserk state, having three rows of visors, multiple eyes, a horn and a mouth with large and sharp teeth. Its body color also changes from orange-yellow to that of a more dark brownish-red color.

On the surface, this Unit appears to have only the standard functions of an Evangelion. Like most Evas, it can wield different types of equipment and weapons. In its first appearance, it was outfitted with a bizarre piece of equipment attached to its back composed of several tendrils which can morph into a large rocket booster for extremely fast flight. When fighting Eva-02', it uses a giant scythe as a melee weapon.

However, it quickly displayed several powerful and Angel-like capabilities. This unit does not appear to be powered by any external energy source, such as a cable or battery, which implies that it may be powered by an S² Engine. Also unique is that its entire body functions as a Core, meaning that it's a difficult unit to destroy, as it has no specific weak point and can regenerate from anything short of complete body destruction, as it was decapitated on two occasions without any loss in function or profusely spraying blood. Mark.09 also displayed the Angel's trademark cross-shaped energy blasts.

Mari and Ritsuko refered to it as an "Adams' Vessel" on several occasions. During its second attack to the AAA Wunder, it tries to somehow hijack control of the ship from Unit-01, releasing a glowing blue substance not unlike the one produced by the Ninth Angel, with Ritsuko refering to it as "Wunder's original master" this time. This implies that Mark.09 is likely a direct clone or copy of one of the surviving Adams.

Retrieved from "https://evangelion.fandom.com/wiki/Evangelion_Mark.09?oldid=39963"
Community content is available under CC-BY-SA unless otherwise noted.