This article has a collection of images to further represent its content. To see its gallery, visit Evangelion Mark.06/Gallery.
"Unit-06" redirects here. For the Mass Production Unit-06, see Mass Production Evangelion#Specific Eva Units. 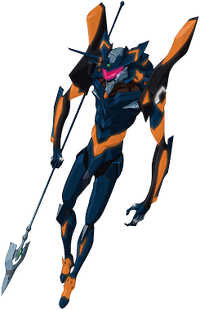 Evangelion Mark.06 (Mark.06[?], "Māku Shikkusu") is one of the new Evangelion units to be introduced in the Rebuild of Evangelion tetralogy.

Evangelion: 1.0 You Are (Not) AloneEdit

After the demise of the 6th Angel, Mark.06 is shown lacking its armor and restraints, still under construction in the Tabgha Moon Base, in front of a series of coffins from one of which raises its designated pilot, Kaworu Nagisa.

During their reconnaissance to Tabgha Base, Gendo and Fuyutsuki observe that the construction process of the Evangelion Mark.06 is unusual, although it isn't specified how, and that SEELE have constructed it in secret to advance their own hidden agenda according to Dead Sea Scrolls Apocrypha. Keel Lorenz refers to the Mark.06 as the true Evangelion, to play a role in fulfilling the covenant with Lilith. Fuyutsuki takes this to mean that SEELE wants to create a real "god", not just false ones.

Evangelion Mark.06 is first sortied in secret from the Moon base right before the 10th Angel attacks Tokyo-3. Arriving as Third Impact begins, Mark.06 throws the Spear of Cassius towards Evangelion Unit-01, impaling its core and disabling it, halting Third Impact and somewhat lessening its effects.

At some point during the 14 years that transpired between Evangelion: 2.0 and Evangelion: 3.0, Mark.06 was modified into an Independent Type Unit, after which, constant abuse of the unit brought it to a state of ruin.

In Evangelion 3.0: You Can (Not) Redo, Mark.06 is fused to Lilith's neck, replacing its original head that now resides in a room in the upper levels of the ruined NERV HQ. Mark.06 and Lilith appear much larger in size, and the former is covered in a white substance while being in suspended animation (being absorbed by Lilith to replace her head), impaled by two Spears of Longinus as opposed to one of the spears being a Spear of Cassius like Kaworu believed.

The final armored Mark.06 is a deep blue with yellow trim. The shoulder pylons are designed in a crooked way. The horned helmet, which bears a strong resemblance to Unit-01's, has a red visor covering the eye holes. The entry plug appears to be designed to provide a noticeably higher field-of-vision for the pilot. The Evangelion has shown to be capable of levitation while bearing an Angelic halo, which—in addition to the dialogue between SEELE, Gendo, and Fuyutsuki—hints at extremely potent capabilities. Mark.06 lacks an outlet for an external power source,[1] implying an internal source of power.

Evangelion Mark.06 was constructed at NERV's lunar 7th Branch, Tabgha Base. It initially appears unfinished, with its body covered in a rubbery white material,[2] and a purple mask covering its face, bearing the logo of SEELE with two dark holes at the top which marks under them that make it seem as if they were crying. The morphology of the head and neck is very similar to Lilith, although the more defined body, along with what appears to be a core visible beneath the fabric, is closer to a normal Evangelion. An IV-like device labeled BTB is connected to the Eva's left arm.

Later, the white cover is removed and the Eva undergoes the process of outfitting. The exposed skin on the head is dark gray while the body is tightly covered on a darker fiber that resembles muscle tissue. The mask remains affixed to the face, although it appears slightly modified, with the SEELE logo taking more space than before and the crying marks under the holes at the top removed. The middle part of the mask, approximately where the eyes would be, is hidden by a provisional covering held tightly by external wires as the helmet is readied for application.

Retrieved from "https://evangelion.fandom.com/wiki/Evangelion_Mark.06?oldid=40130"
Community content is available under CC-BY-SA unless otherwise noted.